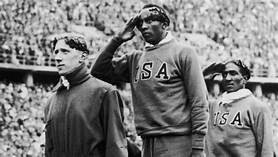 via Zoom
Register Here
After registering, you will receive a confirmation email containing information about joining the meeting
In 1936, Marty Glickman and Sam Stoller were denied participation and Gretel Bergman was not allowed on the German Olympic team.  Some Americans boycotted thre Games to delegitimize the Nazi regime.  Jesse Owens ruined Hitler's "coming out" party. In 1972, Mark Spitz, gold medalist, was targeted during a terrorist attack in the Olympic Village.  The International Olympic Committee did not acknowledge the tragedy until 2016.
Join Evan Weiner, speaker and author with a radio and TV bacground, as he recalls these events that stained these Olympic Games. In 2017, the Dept of State sent him to talk to foreign nationals at the George Bush Presidential Library in College Station, TX to speak about the politics of sports business in America.
This free program is part of the Federation’s Connecting With Community Series.
Share