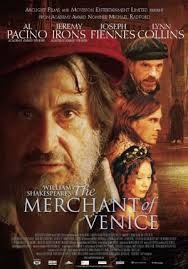 The Jewish Federation Connecting with Community series will show the film, The Merchant of Venice from 2004. Film version includes Al Pacino, Ralph Feinnes, Jeremy Irons and other well known actors.  The film will begin at 10:45, break for lunch at noon, and finish after lunch

This film will be followed on Thursday, March 9 with Hugh Black who will discuss James S. Shapiro's book Shakespeare and the Jews, to commemorate the 400th anniversary of Shakespeare's death.