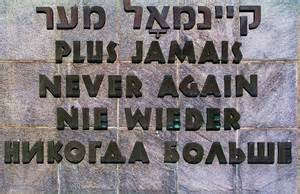 Jewish Federation of the Berkshires presents a film screening of "B-2247 A Granddaughter's Understanding" by Sara Greenberg in honor of Holocaust Remembrance Day.

What does it mean to be a third generation descendant of Holocaust survivors?  Beginning with a young girl's discovery of the number on her grandfather's arm and ending with an inter-generational family trip back to Birkenau/Auschwitz, this documentary culminates in an intense recognition of a generation's obligation to retell their grandparents' stories to the world and to future generations.  May we never forget.

AFTER THE FILM:  Join us for a conversation with Sara Greenberg, the film's producer/director, and Judy Levin, interviewer with the Transcending Trauma Project, exploring the intergenerational impact and legacy of the Holocaust.  A candle lighting and moment of silence will be observed.

This event is free and open to the public.  Space is limited.