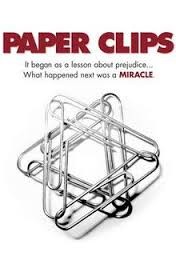 The Jewish Federation Connecting with Community series screens Paper Clips, a film about a class project in rural Tennessee through which students explore the Holocaust.

Paper Clips takes place in the rural blue-collar Tennessee community of Whitwell, where a middle-school class
attempts to understand and take on a project that reflects World War II’s Holocaust by collecting paper clips, each of which represents a human life lost in the Nazis’ slaughter of Jews. Paper clips were chosen in part because Norwegians wore them on their lapels as a symbol of resistance against Nazi occupation during World War II. This documentary film about the project was released in 2004.