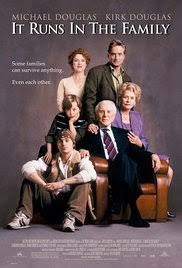 The Jewish Federation Connecting with Community will screen the film, It Runs in the Family starring Kirk Douglas and Michael Douglas.

Three generations of males -- grandfather Mitch Gromberg (Kirk Douglas), son Alex (Michael Douglas) and grandson Asher (Cameron Douglas) -- try to chart their way through personal upheavals and come together after Mitch suffers a stroke. Alex, a womanizer going through a midlife crisis and fearing he's become like his neglectful father, attempts to save Asher from a life of drugs. None of them wanted to turn into their fathers, but it'll take a lot more than wishes to heal the damage done.

The film is 109 minutes long and will be shown in its entirety with no lunch being served due to Passover preparation.