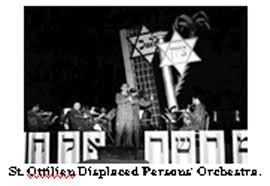 The Jewish Federation Connecting with Community will screen the film Creating Harmony: The Displaced Persons' Orchestra from St. Ottilien. The film was inspired by Sonia Beker's book Symphony on Fire and Robert Hiliard's Surviving the American.

It is the uplifting true story, narrated by Tovah Feldshuh, of a displaced persons' orchestra, following several musicians' journeys from Vilna and Kovna to Dachau and assembling in the Displaced Persons's Camp of St. Ottilien in Bavaria, Germany.

From 1945 to 1948, the orchestra played triumphantly in striped concentration camp uniforms, in front of a banner that read “Am Yisroel Chai,” (“The people of Israel live”). After garnering praise for their inspirational performances all over war-torn Europe, the orchestra was asked to perform for the International Tribunal during the Nazi trials in Nuremberg and for the first Zionist congress. David Ben-Gurion and Golda Meir were among the orchestra’s fans, and on two occasions the ensemble was joined in Germany by conductor Leonard Bernstein.