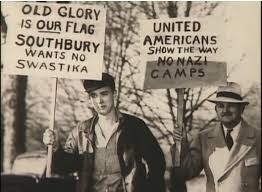 The Jewish Federation Connecting with Community program presents "Home of the Brave: When Southbury Said No to the Nazis."

In the late 1930s, in an attempt to avoid a second world war, countries around the globe worked to curb increasingly hostile Nazi aggression through policies of appeasement. The United States did its part by not only avoiding military intervention in Europe but also by allowing the German-American Bund (the American wing of the Nazi party) to set up camps across the country. When the Nazis moved into Southbury, however, local citizens reacted forcefully, eventually pushing the anti-Semitic settlers out of the state.

In the summer of 2012, a committee of religious and civic leaders began to formulate plans to celebrate the 75th anniversary of those events – events that, though historically significant, were little-remembered even within the town of Southbury itself. Filmmaker Scott Sniffen of Sniffen Pictures in Southbury was brought on board to share the story of that dramatic time through a new documentary – the documentary that would become  Home of the Brave: When Southbury Said No to the Nazis.

Sniffen worked with the Southbury Historical Society, The Republican-American newspaper based in Waterbury and local citizens to create the film, which includes interviews with many people close to the story, including eyewitnesses who were, of course, very young at the time of the events.