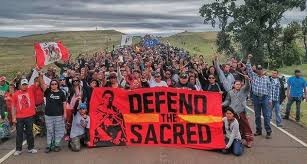 Culled form 18 hours of interviews with 33 people at Standing Rock - including youth, mothers, grandmothers, grandfathers, First Nation people and non-Indian supporters.  This chronicles the story of the Water Protectors at Standing Rock and their connection to the history of the American Indian Movement on their treaty-given lands of the American West.

Fidel Moreno identifies as Huichol, Chichimeca and Mexican American.  He is an Oscar nominee in the Best Short Documentary category as co-producer and co-director of "Wiping the Tears of 7 Generations."