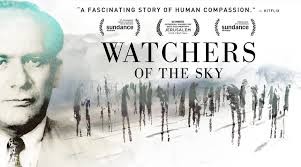 The Jewish Federation of the Berkshires Connecting with Community will commemorate Yom HaShoah by screening Watchers of the Sky, a 2014 documentary that sets out to uncover the forgotten life of Raphael Lemkin, the man who coined the word "genocide" and who believed the law could protect the world from mass atrocities.

Inspired by Samantha Power's Pulitzer Prize-winning book, A Problem from Hell, Watchers of the Sky is a provocative journey from Nuremberg to The Hague, from Bosnia to Darfur, from criminality to justice, and from apathy to action.  The film depicts the journey of lawyer Raphael Lemkin and his efforts in lobbying the United Nations to establish the Genocide Convention.

This 120 minutes film will be screened in two segments; the first beginning at 10:45am and the second starting after lunch at approximately 1:00pm.