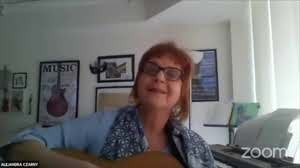 Alejandra Czarny has been singing and playing Yiddish songs since she was a teenager. Originally from Argentina, where she hosted her own Jewish music radio program, Alejandra has for the last 18 years lived in South Florida, where she has long served as the Music Director of the Temple Sinai of Hollywood. Throughout her career she has recorded a total of three CDs, the first two of which - “Songs about Songs” and “Under the White Stars” - include Yiddish songs and several original compositions. She has performed this repertoire regularly throughout Europe and the Americas in a number of festivals and concerts. More recently, in 2018 Alejandra released her third CD, "Viene Siendo Tiempo," which is made up entirely of her own compositions. In her work, Alejandra employs her extensive background as a music therapist by, for example, facilitating singing-therapy groups as well as teacher training programs.

These songs and stories will feature a live performance of both traditional and modern Yiddish songs designed for plenty of audience participation. Alejandre Czarny. musician and educator will share the background of the songs and a brief translation of them, to provide us with a wider approach of this musical experience. The repertoire includes lullabies, protest, and love songs and more.  Some of the lyrics will be provided to enhance participation.