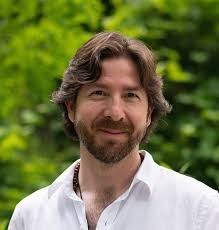 The Jewish Federation Connecting with Community program hosts writer, artist, scholar of Hasidic thought, and spiritual leader of New Lebanon’s Abode of the Message Netanel Miles-Yépez, who will talk about “The Animal and Divine Souls in Jewish Thought.”

In this talk, Netanel Miles-Yépez, a long-time student of Rabbi Zalman Schachter-Shalomi, the founder of Jewish
Renewal, will discuss the concepts of righteousness and wickedness in Jewish thought, especially as expressed in the Talmud and Hasidism. “Before we are born, according to a Jewish teaching, we are administered
an oath by an angel, in which we promise to ‘be righteous, and be not wicked.’” Miles-Yepez will be posing some of
the big question, such as: “How do we know when a person is righteous or wicked in this life?” He will then look
at how these ideas relate to the three natures of the human being—animal, human, divine—discussed in Jewish
mystical thought, and the attitude a person needs to take to live a holy life.
Netanel Miles-Yépez is from a family of Crypto-Jews with roots in Mexico. After studying history of religions
and comparative religion at Michigan State University, he moved to Boulder, Colorado, to study with the innovative
Hasidic master and leader in ecumenical dialogue, Reb Zalman. In 2004, he and Schachter-Shalomi co-founded
the Sufi-Hasidic, Inayati-Maimuni Order, fusing the Sufiand Hasidic principles of spirituality and practice espoused
by Rabbi Avraham Maimuni in 13th-century Egypt with the teachings of the Ba’al Shem Tov and Hazrat Inayat Khan.
As a writer, Miles-Yépez is known for his critically acclaimed translation, My Love Stands Behind a Wall: A Translation of the Song of Songs and Other Poems (2015), as well as his commentaries on Hasidic spirituality (written with Reb Zalman), A Heart Afire: Stories and Teachings of the Early Hasidic Masters (2009) and
A Hidden Light: Stories and Teachings of Early HaBaD and Bratzlav Hasidism (2011). Currently,
he is spiritual director at the Abode of the Message, a Eco-Sufi village and retreat center in New Lebanon, and
adjunct faculty in the Department of Religious Studies at Naropa University in Boulder, Colorado.