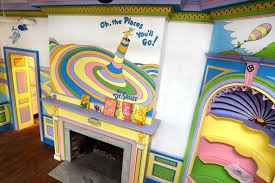 The Jewish Federation Connecting with Community presents "Seuss in Springfield" with Karen Fisk, Director of Marketing and Communication Strategy for the Springfield Museums, Home of the Amazing World of Dr. Seuss.

A Dr. Seuss museum was the number one request of the more than four million people who visited the Dr. Seuss National Memorial Sculpture Garden at the Springfield Museums since it opened in 2002.

The garden celebrates Theodor Seuss Geisel, aka Dr, Seuss, in the city in which he was born and raised.  Fifteen years later, The Museums opened The Amazing World of Dr. Seuss Museum, which has doubled attendance and has generated a major impact on the City of Springfield.

Theodor Seuss Geisel (March 2, 1904 – September 24, 1991) was an American children's author, political cartoonist, and animator. He is known for his work writing and illustrating more than 60 books under the pen name  Dr. Seuss.  His work includes many of the most popular children's books of all time, selling over 600 million copies and being translated into more than 20 languages by the time of his death.

How is Seuss in Springfield a gateway for the world to experience Western MA?  Come join us to discover the answers.