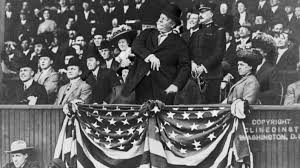 The Jewish Federation Connecting with Community presents "US Presidents and Sports" with journalist, radio and tv personality and international lecturer, Evan Weiner.

Theodore Roosevelt is credited with saving football, William Howard Taft had a bad morning at the office in 1910 as women demanded the right to vote and he fled to watch a baseball game, which would become the first ever Presidential opener.  FDR, JFK and LBJ all had sports impacts.

Richard Nixon opened up China because of sports and Jimmy Carter used sports as leverage in dealing with the Soviet Union's invasion of Afghanistan in 1979.

There are other times when Presidential decisions were made with a sports calculus in mind.  Come and hear how sports influenced politics and vice versa.