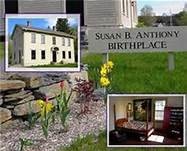 Join us as Cassandra Peltier, Executive Director of the Susan, B. Anthony Birthplace Museum in Adams, MA as she shares a narrative which begins after the Civil War, when dress reform resurged, the bicycle became widely available and women were becoming nurses, doctors, journalists, publishers in the worlds of business and finance AND yet they could NOT vote.

Women began to make their own money, waited longer to marry, travelled, worked, and became independent and unshackled. Women demanded their rightful place at the polls not with words but with action.

This free program is part of the Federation's Connecting With Community series..