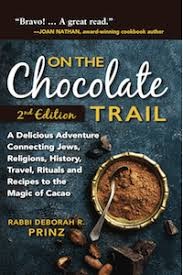 On the Chocolate Trail: A Delicious Adventure Connecting Jews, Religions, History, Travel, Rituals and Recipes to the Magic of Cacao

Click Here to Register
After registering, you will receive a confirmation email containing information about joining the meeting

Join the Jewish Federation of the Berkshires with Rabbi Debbie Prinz on the chocolate trail for a gastronomic adventure. The next time you pick up a piece of chocolate, consider that you are partaking in an age-old passion for religion and food. Explore the surprising chocolate narratives and rituals of Pre-Columbians, Jews, Catholics, Protestants and Quakers.

On the Chocolate Trail uniquely melds a popularity of chocolate with a fascination about religions. Those interested in the connectedness among peoples will crave this unique approach. Delight your mind and your taste buds as this book unscrambles the mysteries of religions and chocolate along a trail of economic development spanning cultures, countries, centuries, continents, and convictions.-

Rabbi Prinz has held a number of leadership positions in the national and regional Reform movement, having recently served the Central Conference of American Rabbis (CCAR) as Director of Program and Member Services and the Director of the Joint Commission on Rabbinic Mentoring. The Rabbi Emerita of Temple Adat Shalom, San Diego County, California, she held the position of Senior Rabbi for almost twenty years. Prior to that she was, for seven years, the Rabbi of a synagogue in Bergen County, New Jersey, and also the Assistant Rabbi of Central Synagogue in Manhattan.