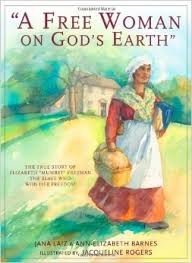 THIS PROGRAM WAS RESCHEDULED
FROM THURSDAY, JANUARY 26

The Jewish Federation Connecting with Community series welcomes historical interpreter Ann-Elizabeth Barnes who will tell the story of Elizabeth Freeman (Mumbet), the African slave woman who lived in MA and who sued for her freedom.

Ann-Elizabeth Barnes lives in South Egremont.  In the year 2000, she became an historic site interpreter for the Trustees of Reservations, primarily at the Ashley House n Sheffield and the Mission House in Stockbridge.  While there, she discovered the story of Mumbet, the enslaved woman who successfully sued for her freedom in 1781 basing her case on the newly ratified Massachusetts Constitution that stated "all men are created free and equal."  Based on her case and one other, two years later, Massachusetts banned slavery, 80 years before the Civil War.

Barnes will tell the story of Mumbet and describe the process she went through in writing the book "A Free Woman on God's Earth," the true story of Elizabeth "Mumbet" Freeman, the slave who won her freedom.