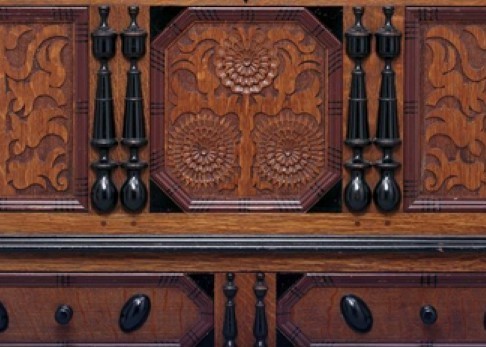 In the early twentieth century, Jewish cabinetmakers from Eastern Europe played a pivotal role in the emerging market for antiques and their reproductions. In this talk, Briann Greenfield and Erica Lome explore the lives and careers of two immigrants, Israel Sack and Nathan Margolis, who trained together in Lithuania and became noted authorities on Early American furniture. Their clients included some of the most famous collectors of their era, such as Henry Francis du Pont, J.P. Morgan, and Luke Vincent Lockwood.

As an antique dealer and cabinetmaker respectively, Sack and Margolis exemplified a larger tradition whereby America’s oldest families depended on Jewish immigrant labor to preserve and reproduce their colonial heritage. This talk recovers their fascinating legacy and demonstrates their lasting influence on American decorative arts.

Briann Greenfield is the author of Out of the Attic: Inventing Antiques in Twentieth-Century New England (University of Massachusetts Press, 2009).  She is currently Director of the Division of Preservation and Access and has previously served as executive director of the Harriet Beecher Stowe Center and the New Jersey Council for the Humanities. Greenfield is also a former professor of history at Central Connecticut State University, where she administered the public history program and taught broadly across the curriculum. Greenfield received her bachelor’s degree from the University of New Hampshire and earned an MA in Museum Studies and a Ph.D. in American Studies from Brown University.

Erica Lome, PhD is the Peggy N. Gerry Curatorial Associate at the Concord Museum, a grant-funded position sponsored by the Decorative Arts Trust. In March 2022, she will become Associate Curator at Historic New England. Erica earned her doctorate at the University of Delaware, where she wrote a dissertation titled: “Heirlooms of Tomorrow: Crafting and Consuming Colonial Revival Furniture, 1890-1945.” She also has a MA in Decorative Arts, Design History, and Material Culture from the Bard Graduate Center in New York City.