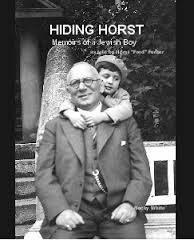 The Jewish Federation Connecting with Community series presents a Staged Reading – Hiding Horst, with Laura Ferber-Hazen and community actors, who will perform the play Hiding Horst, which is based on a true Holocaust story.

Laura Ferber-Hazen and community actors will present a play reading from this true story that became both a book
and a play by Becky White. The story was told by the real life Fred (Horst) Ferber. In Holland in 1942, a 12 year old
boy, Horst Ferber went into hiding for 3 years. Through the heroic efforts of the Dutch, who hid 30,000 Jews, most
survived. Horst Ferber was one of them. Fortunately for him, he did not obey his deportation orders.

Laura is an actress, set designer, and director and has recently become the executive director of Development in the United States for Friends of Herzog Hospital in Jerusalem. Laura is the daughter of a Holocaust survivor and escapee Harold Ferber, and she says her dream is to carry on the brave, intelligent, and giving nature of her influential lineage.