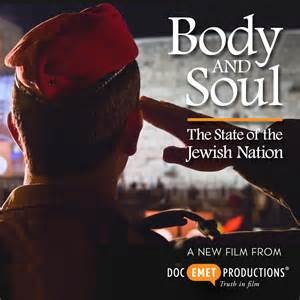 The Jewish Federation of the Berkshires in collaboration with Hadassah will present the film, Body and Soul – The State of the Jewish Nation, a comprehensive examination of the broad and deep connections between the Jewish People and the Land of Israel. World-renowned historians, archeologists, political scientists, religious leaders, and international law and media experts trace the evocative evolution of the relationship between the Jewish People and their homeland that is over 3,000 years old.

"Jewish identity is born in a journey to the Land of Israel", declares Rabbi Lord Jonathan Sacks of the United Kingdom. That journey moves through the First and Second Temple periods and the Middle Ages, then to modernity, where the development of political Zionism catalyzed the blossoming of a new Jewish spirit. That renewal of Jewish spirit resulted in the rebirth of Jewish sovereignty in the Land, an event that Harvard University Professor Ruth Wisse declares "a miracle of truly Biblical proportions."

Director Gloria Z. Greenfield will speak after the film.