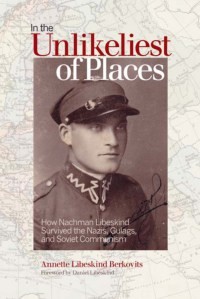 The Jewish Federation of the Berkshires Connecting with Community series “In the Unlikeliest of Places” – A Father’s Remarkable Story, Told by His Daughter.

Three years after her father’s death, Annette Berkovits was going through his things and found a box of tapes, several years’ worth, that in his baritone voice recounted his spectacular life, with its triumphs and tragedies.

Nachman Libeskind’s remarkable story is an odyssey through crucial events of the 20th century. With an unshakable will and a few drops of luck, he survived a pre-war Polish prison, witnessed the 1939 Nazi invasion of Lodz, and was imprisoned in a brutal Soviet gulag. Upon regaining his freedom, he trekked to the foothills of the Himalayas, where he found and nearly lost the love of his life. Later, the crushing Communist regime and a lingering postwar anti-Semitism in Poland drove Nachman and his young family to Israel, where he faced a new form of discrimination.  Then, defiantly, Nachman turned a pocketful of change into a new life in New York City, where a heartbreaking promise led to his unlikely success as a modernist painter while in his 70s.
With just a box of tapes, Annette Libeskind Berkovits tells more than her father’s story – she builds an uncommon
family saga and re-imagines a turbulent past. In the process she uncovers a stubborn optimism that flourished
in the unlikeliest of places.

Annette Libeskind Berkovits was born in Kyrgyzstan and grew up in postwar Poland and the fledgling State of Israel before coming to America at age sixteen. In her three-decade career with the Wildlife Conservation Society in New York, she spearheaded the institution’s nationwide and worldwide science education programs. Her
brother is noted architect Daniel Libeskind, whose projects include the Jewish Museum Berlin and the World Trade
Center master plan. Their family story was chronicled in her book: In the Unlikeliest of Places: How Nachman Libeskind Survived the Nazis, Gulags, and Soviet Communism.
This free program is part of the Federation’s Connecting With Community Series and will be followed by a kosher
hot lunch. Lunch is a $2 suggested donation for adults over 60 years of age or $7 for all others. Advance reservations
are required for lunch and can be made by calling (413) 442-2200 before 9 a.m. on the day of the program.