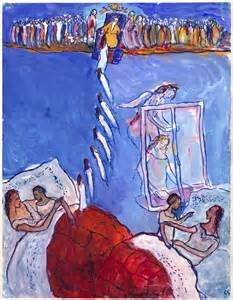 Salomon was born in 1917 in Berlin to a family of cultivated, highly assimilated German Jews. Her mother’s family
suffered multiple suicides, and her own mother killed herself when Charlotte was only seven. When she was 23, she
learned the truth about her mother and though she felt the same pull of despair, Charlotte found an outlet in her painting. She compiled her artwork into a piece she called “Life, or Theatre?” that blended music, dramatic text and stunning visual fantasies to tell a partly imagined story of her life. Her work was saved from destruction when she put her thousands of paintings in a suitcase and begged a friend to hide it. “C’est tout ma vie,” she said – “This is my entire life.”

Charlotte was murdered in Auschwitz – because she was pregnant when she arrived at the camp, she was immediately put to death. Her work was rediscovered decades later in France, still in the suitcase where she hid it, and is now housed in an Amsterdam museum.

Kaplan will present this program in a one woman performance and use slides of Salomon’s work. In addition to teaching at Smith College, Kaplan is a playwright and director whose work, much of which features Jewish themes, has been performed both nationally and internationally.  She has been the recipient of numerous accolades and fellowships.

This free program is part of the Federation’s Connecting With Community Series and will be followed by a kosher
hot lunch. Lunch is a $2 suggested donation for adults over 60 years of age or $7 for all others. Advance reservations
are required for lunch and can be made by calling (413) 442-2200 before 9 a.m. on the day of the program.