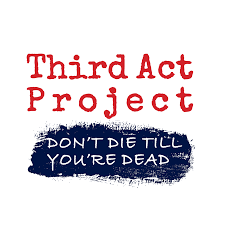 The Jewish Federation Connecting with Community presents "Don't Die Till You're Dead: Becoming the Protagonist in Your Third Act" with Sam Bittman, founder and curator of The Third Act Project.

Author and playwright Bittman will speak on the process of growing older, positive risk-taking and the potential for spiritual, intellectual and emotional growth as endless.

A video episode from the current season of The Third Act Project: The Five Wise Guys called "Melancholy Baby" has its characters asking, 'how do we old guys make sense of life without libido?'

Sam BIttman is a graduate of Hunter College with a playwriting degree from the University of Iowa. "I’ve worked as a newspaper editor, freelance communication consultant, a PR writer, and as a designer of landscape and garden." He is now principal curator for the Third Act Project, and director/producer of the Five Wise Guys TV series, now in its second season.