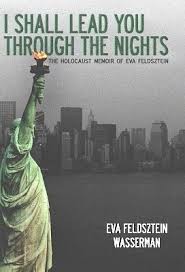 The Jewish Federation Connecting with Community presents "A Mother and Child: From the Warsaw Ghetto to Hope and Freedom," the story of the late Eva Wasserman as told by her children, Dr. Mina Gillers and Dr. Stephen Felton.

Toward the end of her life, Eva Wasserman recorded her memoirs and published a book, I Shall Lead You Through the Nights.  It describes the brutality of the Nazi regime in the Warsaw Ghetto that she and her family lived through, and the destruction and murder of the Jewish population.

Many members of Wasserman's large family were killed, as were her husband and stepson.  She survived with her son, Stephen, who were smuggled out of the ghetto just prior to the uprising in 1943.  They eventually found refuge with a Polish family that protected her and her son.  This family, the Matacz family, were designated "Righteous Gentiles" by the Israeli government and Yad Vashem in 2012.

Dr. Stephen Felton is an ophthalmologist in Princeton, NJ.  He received his MD and PhD from Rutgers University.  He was born in 1942 in the Warsaw Ghetto and came to this country in 1947.  Dr. Mina Gillers grew up with Stephen and their brother Allen in Brooklyn, NY.  She and her husband, Bruce Gillers, met as freshmen at Barnard and Columbia Colleges, and went to medical school together at NY Medical College.  They have 6 children and 6 grandchildren and live in Newton, MA.  Mina practices pediatrics in Dorchester.