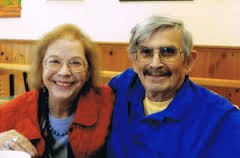 The Jewish Federation Connecting with Community welcomes David C. King and Sharon Flitterman-King,
who will talk about writing their young adult historical novels. David C. King’s book, The Incredible Voyage of the
Columbia, is based on the discovery of the Columbia River in the late 1790s. Narrated by a 16-year-old ship’s
fifth mate, and based on an actual diary discovered by David, this novel combines fact and imagination to weave a compelling tale. He is the author of more than 80 books, mostly non-fiction, in American history, biography, and culture studies.

His First People: An Illustrated History of American Indians (DK Publishing, 2008-2009) has won four national awards and is sold as both an adult and young adult title. The Incredible Voyage of the Columbia is his first novel.
Sharon Flitterman-King was a founding faculty member of the Bard Institute for Writing and Thinking. Her young adult novel, A Secret Star, is about a Jewish child hidden by Polish Christians during World War II. She researched many personal narratives and historical documents and will talk about the triumphs and challenges of
making a story that lives and breathes out of the facts of the Shoah. The authors live in the Berkshires.