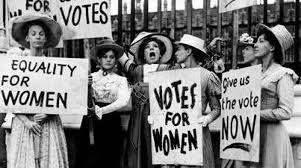 The Women's Suffrage Movement in the US was not an isolated phenomenon.  Women's rights to vote were granted and rescinded many times in many countries, states, and provinces in the centuries leading up to the ratification of the 19th Amendment to the US Constitution.  The beginning of the US Women's Suffrage Movement was marked officially by the 1848 Seneca Falls Convention, yet women's right to vote was not nationally codified for another eight decades.

We will look at some of the long-standing social and political climates which kept women from the polls as well as some of the historical events and remarkable women that helped the movement reach its goals.