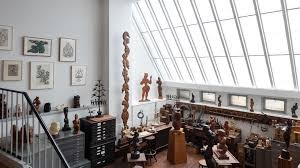 Join Sasha Davis, executive director of the Renee & Chaim Gross Foundation in New York for “ The World of Chaim Gross: Sculptor, Collector, and Educator.”
Artist Chaim Gross (1902-91) immigrated to the United States as a teenager, fleeing the unrest of World War I and anti-Semitism in Europe. He settled in New York City, becoming a sculptor renowned for his wood carvings that drew inspiration from African, folk, and modern forms. He collected from friends and artists he admired, building an art collection with wife Renee that currently numbers over 12,000 objects. Many of his closest friends were also Jewish immigrants, and his work became increasingly tied to his Jewish roots in the latter part of his career.

The Grosses established a private foundation to preserve their art collections, home, and Gross’s sculpture studio at 526 LaGuardia Place in Greenwich Village, New York City. This talk will center on Gross’s unique biography, work, and legacy furthered through the Renee & Chaim Gross Foundation.

Prior to serving as director of the Foundation, Davis was its curator of collections for over three years. She holds a BA in Art History from New York University and a certificate in Arts Administration, also from NYU.