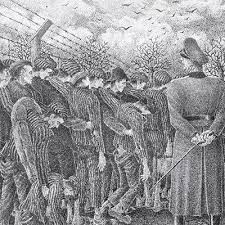 Join us for a community commemoration of Yom Hashoah-Holocaust Remembrance Day.

Featured speaker Timothy Boyce Esq. will recount Odd Nansen’s life-saving work providing a haven for Jewish refugees and all who were fleeing Nazi persecution. After he was arrested, Nansen courageously maintained a secret diary on tissue-paper pages which included his drawings of the horrors of concentration camp life in real-time. (Nansen was a sketch-artist.) This diary and its drawings, published after the war, provided an important first-hand account of the atrocities perpetrated at Sachsenhausen.

Rabbi David Weiner of Knesset Israel will offer a benediction and Senator Adam Hinds will present opening remarks. Rabbi Barbara Cohen, of Congregation Ahavath Sholom will facilitate a memorial candle lighting and prayers in memory of those murdered during the Holocaust following the speaker.

Hailed by The New Yorker as “among the most compelling documents to come out of the war,” From Day to Day is a World War II concentration camp diary - one of only a handful ever translated into English. This inspiring diary brilliantly illuminates Nansen’s daily struggle, not only to survive, but to preserve his sanity and maintain his humanity. After having been out of print for over 60 years, Timothy Boyce rescued the diary from oblivion after reading the memoir of another Holocaust survivor, whose life, as a 10 year-old boy, was saved by Nansen, while both were prisoners in Sachsenhausen.

Odd Nansen's diary is available for purchase at www.timboyce.com, All book royalties and speaking fees are donated to the US Holocaust Memorial Museum in DC (50%) and the Norwegian Center for Holocaust Studies in Oslo (50%).