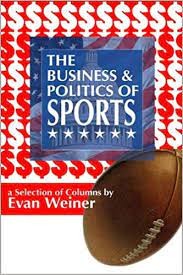 The Jewish Federation of the Berkshires welcomes radio journalist and newspaper columnist Evan Weiner.  Writes Weiner: “To have a successful big-time sports operation in the United States, you need three components or a three-legged stool: Government support (as in building stadiums and arenas and creating cable TV), a large cable TV contract, and big-time corporate support. Those three are essential, followed by marketing partners. “Fans are not considered anymore. They can watch games on TV. A commissioner works for the owners not the fans or players. A commissioner is a political lobbyist. It is a business. Nothing more, nothing less.”
A radio journalist from the age of 15, Evan Weiner won two Associated Press Awards in 1978 and 1979.
In the 1980s, he started his long association with Westwood One Radio. Weiner was a contributing
columnist for several newspapers throughout the US. He did a daily commentary called "The Business of
Sports" for Westwood One Radio between 1999 and 2006. He has written six books about the business
and politics of sports.
Weiner also lectures at colleges and universities about the business and politics of sports, including the
globalization of North American sports and how technology is changing sports. His book, The Business
and Politics of Sports, has been critically acclaimed by academic journals and is used as part of a number
of sports business management courses at schools throughout the United States.