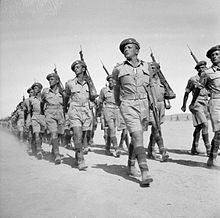 The Jewish Federation of the Berkshires presents:
Knosh & Knowledge
Choosing Enemies: The Jews of Palestine in World War II

When war between Britain and Germany broke out in 1939, the Jews of Palestine faced a dilemma - should they continue to oppose Britain or join them to fight Hitler, Germans and their allies.

Join Dr. Louis D. Levine as he examines decisions that were made and ways that Jews of Palestine participated in the war against the Axis.

Dr. Levine was the founding Director of Collections and Exhibitions at the Museum of Jewish Heritage - A Living Memorial to the Holocaust in New York, where he directed and curated over 20 exhibitions.