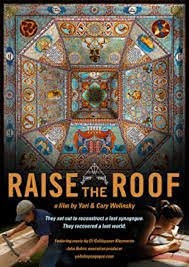 The Jewish Federation Connecting with Community will screen the film Raise the Roof which follows artists Rick and Laura Brown, who are not Jewish and not Polish, yet they set out to rebuild Gwozdziec, one of the magnificent 18th century wooden synagogues of Poland, the last of which were destroyed by Nazis during World War II.

Their vision inspires hundreds of people to join them by using their hands, old tools and techniques as they rediscover Gwozdziec's history, culture and art. Raise the Roof follows the Browns and the Handshouse Studio team to Sanok, Poland, as they began building the new Gwozdziec roof.