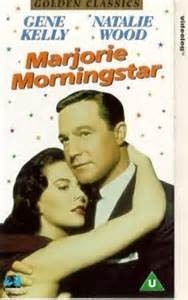 The Jewish Federation of the Berkshires will show the 1958 film Marjorie Morningstar based on the 1955 novel of the same name by Herman Wouk.  This showing of the film follows the February 23 talk on Herman Wouk by Hugh Black.  The film stars Natalie Wood and Gene Kelly and tells a fictional coming of age story about a young Jewish girl in New York City in the 1950s. Cost $3.