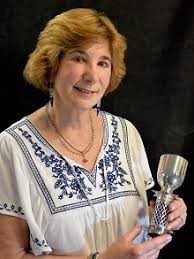 via Zoom
Register Here
After registering, you will receive a confirmation email containing information about joining the meeting

Many Jews know very little, if anything, about the history and evolution of Jewish ceremonial objects used in the home, even though they may possess and use several of them.  Based on research done for her Master’s thesis, Frann Addison has compiled a fascinating and informative presentation exploring the origin and development of these pieces.

Major holidays and celebrations are discussed, as are the ceremonial objects used in accordance with them.   Rituals, superstitions, Christian influence, and the artistic influence of the country in which the pieces were made are noted, as well as an investigation into the evolution of the style and function of each object.

In addition to showing historical ritual objects, Frann will also share a few ceremonial pieces that she has created, as well as those done by other contemporary Jewish metalsmiths.  Approximately 100 ritual objects will be shown.

Frann hopes to enlighten and excite Jews about this aspect of their cultural and ethnic heritage.

After receiving a BA in Art History from Skidmore College, Frann Addison went on to pursue an MFA in metalsmithing at Cranbrook Academy of Art in Michigan.  In 1977 while at Cranbrook, Frann was inspired by an article which became the turning point in her career.  The author of the article believed that there was a need for contemporary design in Judaica, as so much of what was then available, simply mimicked antique ritual objects.  This led Frann to do extensive research which culminated in the writing of her Master’s thesis, “The History of Jewish Ceremonial Objects Used in the Home”, that becoming the basis on which her lecture/slide presentation is based.

In addition to writing her Master’s thesis, Frann created a Kiddush Cup, a Havdalah Spicebox, and a Mezuzah, all of which were part of her graduate degree show in the school’s gallery.  A rabbi happened to see the student show, and was drawn to her ritual objects, and she made a sale.  Could she possibly make a living at this she wondered?   The answer is, “Yes”, as she has been doing so since 1980. She enjoys seeing the potential in found objects and antique elements, and often combines them with her pewter, brass, and copper.  Her work acknowledges the past, yet offers new and unusual forms which satisfy the demands of religious requirements. Frann’s work has been featured in 10 books, in the NY Times, the Boston Globe, calendars, and greeting cards.  Her work can be found in the permanent collection of the Museum of American Jewish History in Philadelphia.

It gives Frann great pleasure to know that her Judaica creations will be lovingly used by individuals or families as they perform ancient rituals linking past and present.  Tradition, spirit, family ~ this is what is important to her.