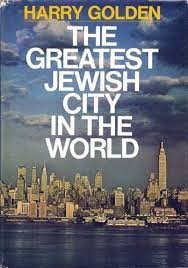 A visual and historical celebration of Jewish accomplishment in the arts and culture of New York City and in multiple social, economic, religious and political realms as well.  Proceeding from the notion that New York is "the greatest Jewish city in the world" (Harry Golden), we review a series of notable New York Jews in alphabetical order [note: "Jewhoo-ing," a play on Yahoo, refers to the activity of listing famous Jews] and thus survey the various fields in which New York Jews have made their mark on their city and on the world at large.

Dr. David E. Kaufman is a scholar of American Jewish history and a former tenured professor at Hebrew Union College in Los Angeles and Hofstra University on Long Island.  His publications include the books Shul with a Pool: The 'Synagogue-Center' in American Jewish History (UPNE, 1999) and Jewhooing the Sixties: American Celebrity and Jewish Identity (UPNE, 2012). Currently Dr. Kaufman is engaged in building a public history organization called "NEW YORK JEW: Center for New York Jewish History, Culture, and Community."