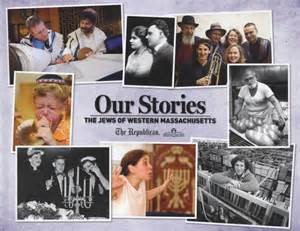 The Jewish Federation of the Berkshires presents author, editor, and columnist Jane Kaufman who will read, speak, and engage in conversation about themes that emerged in researching the pictorial history, Our Stories: The Jews of Western Massachusetts published by The Springfield Republican newspaper in 2014 as part of a series of ethnic histories.  Themes include the immigrant experience, migration from cities to suburbs, changing observance, the role of women, anti-Semitism, and snobbery among Jews in a relatively small geographic area.  Jane will read excerpts from the book that she hopes will spark brief conversations about the themes covered.

In addition to contributing to and editing Our Stories, Jane writes a column on a wide range of topics for The Republican and MassLive.com.  Personal Jewish experience figures prominently in her columns, as does food, cooking, participatory dance, and musing about writing.  Cost $3.