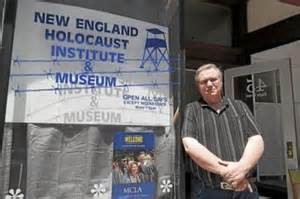 The Jewish Federation of the Berkshires will host Darrell English, founder of the New England Holocaust Institute & Museum in North Adams, MA, for a talk about pre-World War II history, "The German American Bund: Tool of the Nazis."  The German American Bund, an organization of ethnic Germans living in the United States with some 25,000 members, expressed a pro-Nazi stance that included anti-Semitism, strong anti-Communist sentiments, and the demand that the United States remain neutral in the approaching European conflict.

English will draw on his extensive collection of period artifacts to illuminate the Bund's role and influence in the 1930s.  The Bund was active until 1941.  Ultimately, it was outlawed.

The New England Holocaust Institute & Museum is the only museum of its kind in New England.  Its mission is, according to North Adams native English, "Saving the history of the events that we now know as the Holocaust and how within a few short years it is the artifacts that will bear silent witness to the whole event."  Cost $3.