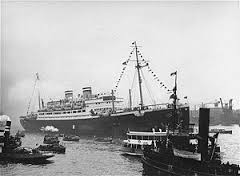 The Jewish Federation Connecting with Community series welcomes Jay S. Zeif, who will discuss "FDR and the MS St. Louis," the infamous "Voyage of the Damned" ship whose Jewish passengers were denied entry to the US in the late 1930s.

In the spring of 1939, 937 German Jews boarded the Hamborg-America Lines MS St. Louis to Havana, Cuba.  Most passengers hoped to escape the horrors of Nazi Germany and eventually enter the US but the ship was denied entry by the Cuban Government and later by the United States  It is generally known that many people use this episode as an example of FDR's anti-Semitism.  Jay S. Zeif, retired financial advisor, "Business News" radio announcer, and writer will set out to show this is untrue.

LUNCH IS NOT SERVED TODAY DUE TO FLOOR MAINTENANCE