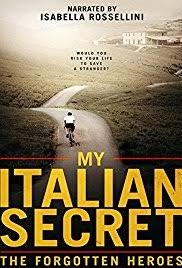 My Italian Secret: The Forgotten Heroes reveals the clandestine Italian resistance movement that helped save thousands of Jews during the Holocaust. Join us for a candle lighting and prayers in memory of those murdered in the Holocaust after the film. Free and open to the public.

After the film: La Rabinessa Liora Kelman of Congregation Beth Israel in Schenectady will share her family history of survival.  The Saranos of Milan were saved in the small Italian village of Mobaroccio during the Holocaust.

Co-sponsored by:
Jewish Federation of the Berkshires, The Catholic Diocese of Springfield, MA and the Italian-American Club of Pittsfield