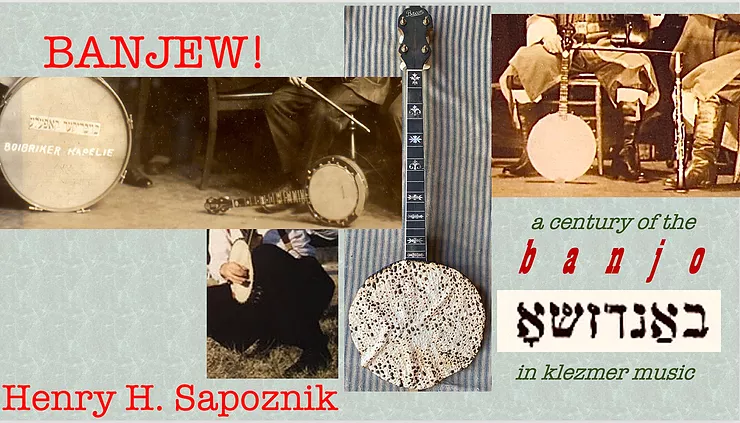 The mass emigration of Eastern European Jews to the United States in the late 19th century occurred while the banjo was a dominant force in American popular music corresponding to ragtime and jazz -- and the brash new instrument the tenor banjo -- offered an unfettered ground floor for this new collaboration. Join musicologist and performer Henry Sapoznik to explore how commercial recordings such as those by Alexander Olshanetsky's Orchestra, Joseph Cherniavksy's Hasidic-American Jazz Band, Abe Schwartz, Dave Tarras, Al Glazer, the Broder Kapelle, and more, reveal how the banjo not only became a mainstream Jewish presence in the Yiddish theater but also how traditional old-time klezmer bands adapted traditional rhythmic figures onto it. The talk will cover Sapoznik’s reintroducing the banjo in the mid-1970s klezmer “revival” and its subsequent worldwide renaissance in Jewish bands today including Jerry Wicentowski, Nefesh Mountain, and Dobronotch.

Henry Sapoznik is an award-winning producer, musicologist and performer, and writer in the fields of traditional and popular Yiddish and American music and culture. ​ Sapoznik, a native Yiddish speaker and child of Holocaust survivors, grew up in an Orthodox home. In his teens, Sapoznik was introduced to traditional American music and took up the banjo. He studied with North Carolina masters Fred Cockerham and Tommy Jarrell during numerous trips to North Carolina with the late Ray Alden. In 1972, Sapoznik co-founded the New York-area group The Delaware Water Gap String Band and confirmed his reputation as a noted player in both southern playing styles and classic ragtime banjo.

Sapoznik was the founding director of the sound archives of the YIVO Institute for Jewish Research in New York from 1982 to 1995. While there, Sapoznik founded and directed the internationally acclaimed KlezKamp: The Yiddish Folk Arts Program beginning in 1985 for the next 30 years. ​A five-time Grammy-nominated producer/performer, Sapoznik has been on over fifty records including having reissued over 30 anthologies of Yiddish, jazz, old-time, cantorial, ragtime, blues, Italian, swing, blackface minstrelsy, and bluegrass recordings.

Sapoznik won a 2002 Peabody award for co-producing the 10-part NPR series “The Yiddish Radio Project.” drawn from his collection of over 10,000 items now part of the American Folklife Center of the Library of Congress. Sapoznik published two books: The Compleat Klezmer (1982) became the standard tune book of the klezmer revival while his Klezmer! Jewish Music From Old World to Our World won the 2000 ASCAP Deems Taylor Award for Excellence in Music History.

Henry Sapoznik’s recent projects are his CD, Banjew (Jalopy Records, 2017), and the 3-CD reissue anthology Protobilly: The Minstrel and Tin Pan Alley DNA of Country Music 1892-2017 co-produced with Dick Spottswood and David Giovanonni (JSP 2019) which has been submitted for 2021 Grammy consideration. ​ Henry Sapoznik has just co-produced and annotated a 2 CD anthology for Smithsonian-Folkways record of American folk music from California recorded in the 1960s and is currently working on a new book: Rediscovering Yiddish New York: A Guide to Jewish Landmarks in The City (Excelsior Press)