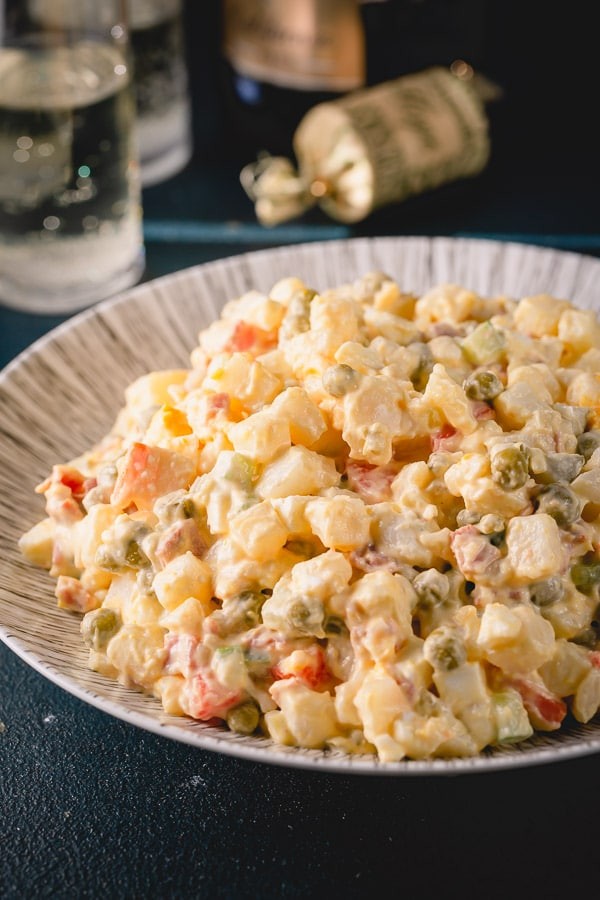 Having reviewed Darra Goldstein’s beautiful cookbook, Beyond the North Wind: Russia in Recipes and Lore, in last month’s column, I realized that in all the places we’ve “visited” in this column, Russia has not been among them. And, considering that all of my grandparents came from that country (at least according to every official document in our possession), it’s probably about time.

One of the reasons I’ve been hesitant to do so is that, in attempting to research my own family’s history, I’ve been dizzied by national borders that have moved back and forth over the centuries, depending on who had conquered whom most recently. In the 20th century alone, the Soviet Union sucked up satellites, only to see them separate again after the fall of that empire. But now the Kremlin has pulled its Hoover out of the closet as it yet again masses troops along the border of Ukraine and its Crimean oblast.

As for my family: My paternal grandmother came from a town called Lida. When she emigrated to the United States at the beginning of the 20th century, the town was in Russia. Hence, the notations on her immigration documents and marriage certificate. But, along the way, Lida has also belonged to Lithuania and Poland, and now it’s part of Belarus. The same story goes for all my other grandparents, and probably for many of our readers’ ancestors.

But how did our people get to “Russia” in the first place?

Given the background of so many American Jews, the first image of “Russian Jews” that pops into our heads may be an exclusively Ashkenazi one, but the Russian Empire extended far and wide. It includes many other communities, including Sephardim, Crimean Karaites, Krymchaks, Mountain Jews, Bukharan Jews, and Georgian Jews.

Jews, having migrated from areas as diverse as Greece, Babylonia, and Persia, can trace their significant presence in Armenia and Georgia back to the Babylonian captivity. They first appeared in Belarus, Ukraine, and the European parts of Russia in the 7th century CE. As might be expected, the merchants among them didn’t stop once they reached Russia but traveled as far as India and China to ply their business. According to the Jewish Virtual Library, on their way south-east during the 8th century, they passed through Khazar lands and so impressed the people there that the natives converted to Judaism. The Khazar kingdom became “The Land of the Jews.”

Kiev, too, situated on the overland trade route to Germanic lands, had a significant Jewish population. But beginning in the 11th century, they were confined to an area known as Jewish Town, perhaps the first ghetto in the Russian Empire. To access the ghetto, one entered the Gate of the Jews.

Given their bad experience in many Western European countries, ranging from persecution to expulsion, Jews happily migrated to Poland in the early 1300s, at the invitation of Casimir III. Casimir was among the best of the rulers under whom our people have lived. He not only prohibited the enforced baptism of Jewish children (and the kidnapping that enabled that nefarious act), he instituted severe punishment for the desecration of Jewish cemeteries.

And when Lithuania took control of Western Russia later that century and granted rights to the Jews, many of our people began to explore new opportunities in the world beyond their shtetls.

But the good times were punctuated by large-scale horrors. In the mid-1600s, pogroms began to devastate Jewish communities. Whether perpetrated by their neighbors in Ukraine, Russia, Poland, or Belarus, these large-scale massacres would occur periodically for centuries. In the pogroms of 1918 to 1922 alone, 150,000 Jews in Ukraine and Belarus were murdered.

One important development in Jewish history occurred in Poland-Ukraine in the 1700s. Rabbi Israel ben Eliezer, aka the Baal Shem Tov, founded the spiritual revival movement that became known as Hasidism. With the help of his disciples, Hasidism spread throughout Eastern Europe, giving hope and joy to many Jews who weren’t able to spend their days in study but could still experience the universal presence of God, even in the seemingly mundane.

Then, toward the end of the 18th century, Tsarina Catherine II (the not-so-Great) sent the Jews packing to the Pale of Settlement, the western region of the Russian Empire. The Pale expanded over time and by the 19th century included all of Russian Poland, Lithuania, Belarus, most of Ukraine, the Crimean peninsula, and Bessarabia. The area became home to about five million Jews.

One would think that Catherine’s decree might have been enough to placate the anti-Semites. But even within the Pale, some cities were off-limits to most Jews, and when Alexander II became Czar in 1881, he enacted harsher and more punitive measures. These included allowing Christians within the Pale to expel Jews from their communities.

Due to their confinement and Russia’s imposition of a burdensome tax, the Jews’ financial position declined precipitously until most lived in poverty. Consequently, the picture of Jewish life with which we are most familiar is due to the vivid depictions of shtetl life by Sholom Aleichem and S. Ansky.

Although the Pale officially existed until its formal abolishment in 1917, the end of that problem led to the start of yet another: the Soviet Union. The Bolshevik Revolution brought with it a dilemma for the Jewish people. Because the Bolsheviks rejected anti-Semitism and eased restrictions on Jews, they earned the support of the Jewish community. In fact, the Red Army was founded by a Jew, Leon Trotsky, and it attracted large numbers of young Jewish volunteers, many of whom rose to high rank.

For a short period in the 1920s, under the new regime, secular Jewish culture in Belarus and western Ukraine flourished, with 1100 Yiddish schools, 40 newspapers, and even state-sponsored theater. But, aiming to solve their “Jewish problem,” the leadership assigned secular Jews to the task of forcing assimilation. They prohibited both religious and Zionist activities, even prohibiting Shabbat observance in 1929. They also banned the use of Hebrew and Yiddish in printed materials, resulting in newspapers published in the Cyrillic alphabet. The final insult: In 1948, after so much suffering during World War II and the Holocaust (more than 2,000,000 Soviet Jews died, either fighting or in Nazi-occupied territories), the Soviets shut down the Moscow State Jewish Theater.

Ultimately, the refusenik movement arose in the 1970s, compelling hundreds of thousands of Jews to demand the right to emigrate. The Soviets were not accommodating, but with leaders like Anatoly (now Natan) Sharansky and the Diaspora Jewish community, they ultimately gained their freedom. According to the Davis Center at Harvard University, almost two million Jews and their non-Jewish relatives have emigrated from the FSU since 1970, more than half going to Israel and the West.

Despite the huge loss, the country’s Jewish population is still the third-largest in Europe, after France and the United Kingdom, with almost 200,000 Jews. Unfortunately, after decades of prohibitions, many know nothing of their heritage.

And, by the way, since we originally migrated to Russia from Greece, Babylonia, and Persia, at what point did those Sephardi and Mizrahi ancestors become Ashkenazim?

This recipe is just one version of a potato salad immensely popular in Russia. With the mustard and pickles, it makes for a tangy addition to a summer meal.

Salt and pepper to taste

In a pot of cold water, boil the potatoes and the carrots until they are firm but tender when poked. Keep a close eye on the pot and check every few minutes.

Drain the potatoes and carrots and add to a large serving bowl.

Microwave the peas for 1½ minutes. Add to bowl.

Peel and dice the eggs. Add to the bowl.

Dice the pickles and add to the bowl.

Blend the mayonnaise with the sour cream and mustard.

Add salt and pepper to taste

Cover the salad and chill for at least two hours or overnight to allow the flavors to come together.

Garnish with dill before serving.