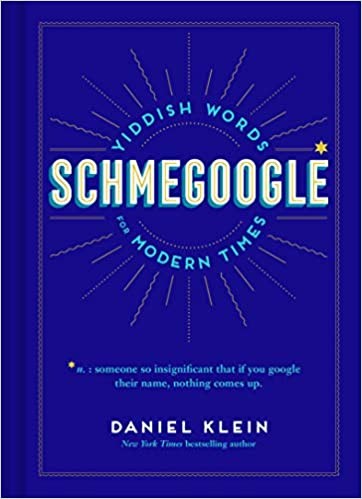 This autumn, Great Barrington’s Daniel Klein releases his latest book, SchmeGoogle: Yiddish Words for Modern Times, which collects Yiddish neologisms he’s come up with that describe social constructs, technological challenges, psychic conundrums, and personality disorders that would have been unknown to the world of our fathers.

[A “schmegoogle,” by the way, is defined as: “A person so insignificant, that when you Google their name, nothing comes up.”]

In August, Klein and BJV editor Albert Stern exchanged emails about the new book that also drew on some of Klein’s earlier books – which have variously used jokes to explain philosophy, philosophy to explain jokes, and philosophy and jokes to explore politics and spiritual ideas – to address this strange spasm of history we’re living through.

SchmeGoogle (Chronicle Books) is available at bookstores and through amazon.com.

Berkshire Jewish Voice: Can you share a new term from SchmeGoogle that might be particularly resonant given the situation in which we find ourselves during this time of pandemic, stay-at-home orders, political dysfunction, civil unrest, fake news, social media screeds, etc. etc.

Daniel Klein: “Polischmerz”: n. The quality of having a dismal or depressing view of the national or world political situation. Which just about everybody has these days. [From the Yiddish word schmerz, meaning pain. Used in a sentence: ‘Rachel has such a case of polischmerz; she just sits and watches videos of cartoon bears all day on her phone.]

BJV: At the Berkshire Jewish Voice, we’ve started to come up with a few Yiddish neologisms of our own about the times we are living in. My entry is, “Maskeit: a person who advocates for the continued wearing of masks in public not so much to control the virus, but because they’re homely.” The BJV's friend, resident Yiddishologist, and spirits correspondent Alex Rosenblum came up with “Hock mir nisht keyn China: Disputing the president's claim that the virus emanating from Wuhan was a Communist plot to disrupt the world order,” and “Bubbe-maskes: An old wives’ tale that covering your mouth will do any good.” Anything you can add?

DK: I adore the new Yiddish words you and your colleague have come up with. It really could be fun to encourage your readers to add more new terms.(**See below.) I have noticed that there are many people who bring every conversation back to the pandemic, blaming every misfortune in their lives on it. I call them “Kovid Kvetches.”

BJV: Does a joke come to mind that might shed some light on the particular situation we are in?

DK: Home from work early, Sam tiptoes upstairs to the master bedroom to surprise his wife. He opens the door and there is his friend, Moshe, in bed with his wife. Moshe, waves his hands and says, "First, what are you going to believe, me or your eyes?"

This classic gag has been applied to our Meshugana-in-Chief from Day One. It captures his uncanny rejection of empiricism.

Psychologists and amateur psychologists (that would be everybody else), love to dissect Trump's personality, coming to the early conclusion that he suffers from Narcissistic Personality Disorder. But lately these analysts have taken comfort in the fact that he is also incompetent, the result of being driven by self-defeating impulses.

A moth goes to an ophthalmologist's office. The ophthalmologist asks him how he can be of help. And the moth says, "My life is a mess. I keep making one bad decision after another and then suffering the consequences."

And the moth says, "Because your light was on."

The M-in-C has been known to go to great lengths to demonstrate his very, very excellent intelligence and talents. But often his demonstrations lack a certain logic.

Izzy shrugs and says, "If I had his voice, I'd be just as good."

BJV: The subtitle of your 2015 book Every Time I Find the Meaning of Life, They Change It is “Wisdom of the Great Philosophers on How to Live.” Which of the great philosophers might have the most to say to us about living through the particular situation we are in, and what would be his or her message?

DK: The German cosmologist, George W. F. Hegel, believed that history unfolded by the dialectical forces of a World Spirit - first that of a Thesis, which is then countered by an Anti-Thesis, which is then brought together in a Synthesis that becomes the new Thesis in this ever-evolving progression. This is Big Picture stuff. These forces transcend us puny people, who don't even live very long anyhow. What do a man's good or bad intentions play in this Big Picture? Bupkis. So forget about taking blame (or credit) for the mishiga’as that's happening all around us. Schlemiels don't count, and we are all schlemiels.

The majority of modern philosophers beg to differ. They believe we have free will and hence are responsible for what happens in the world. Oy. It's enough to make a person wish he were an impotent schlemiel. With a free will, we have to get off our tuchuses and take responsibility for getting this virus under control, stop the emissions that our poisoning our atmosphere, risk our lives to fight against racism and fascism. All of this with only one day of rest per week and last week's tzimmes on the table.

The pandemic and consequently being shut in has caused many people to become increasingly self-reflective, taking stock of their lives. The most compelling words I've heard about this comes from the great philosopher, Woody Allen: "My only regret is that I wasn't somebody else."

BJV: Could you share a personal thought or two about the particular situation in which we find ourselves?

DK: What with the pan-tsuris of Covid-19, Global Climate Change, and the growth of racism and fascism, even the most rational and science-minded of us have the feeling that something supernatural is going on. That the gods are angry with mankind. But why, pray tell ?

Personally, I have never taken the Old Testament more literally than I do recently. Like the Book of Job, where one calamity after another befalls the poor schlub, as Satan pushes Job's divine faith to the limits. Tests him. But why? What has Job done to deserve such misery?

And G-d responds, "Where were you when I laid the foundations of the earth, Schmendrick ?" (Actually, the addition of the term 'Schmendrick' only appears in my zayde's personal translation of the O.T.)

Actually, I kinda get the point of G-d's reply. G-d is omniscient and omnipotent. Why He does whatever he does is beyond human understanding. It just is. Man's mind is finite, but G-d's is infinite. No contest. There is no possible way we can understand G-d's ways. So a pandemic that kills millions is simply beyond us. Maybe it's a punishment, maybe it's a satanic test, but mostly it is simply beyond our understanding.

Maybe Noah's Ark gives a more comprehensible account of an angry god who is fed up with mankind's sins and follies, so decides to wipe out mankind with a momentous flood, leaving only wise old Noah, his wife and children, plus pairs of animals, to start civilization all over again. This story can be read as G-d giving man one last shot at getting it right. A fresh start, two by two, off you go. The pressure is on.

Could the ultimate outcome of COVID-19 come down to the last handful of humans stepping off the ramp with the mission to create a new, just, and cooperative world ?

We hope that Yiddishly-minded readers will take up Daniel Klein’s challenge and come up with some new Yiddish terms that might describe aspects of the situation we find ourselves in the year 2020. Email your new Yiddish words or phrases to astern@jewishberkshires.org. The winner will be chosen by Daniel Klein and will receive a copy of SchmeGoogle, which, after a 14-day quarantine, will be signed by the author (who will be wearing a mask and have his hands and pen sanitized), and then be seal-wrapped and left on your doorstep by a probably COVID-free member of the BJV staff. Notable entries will appear in a future issue of the BJV.