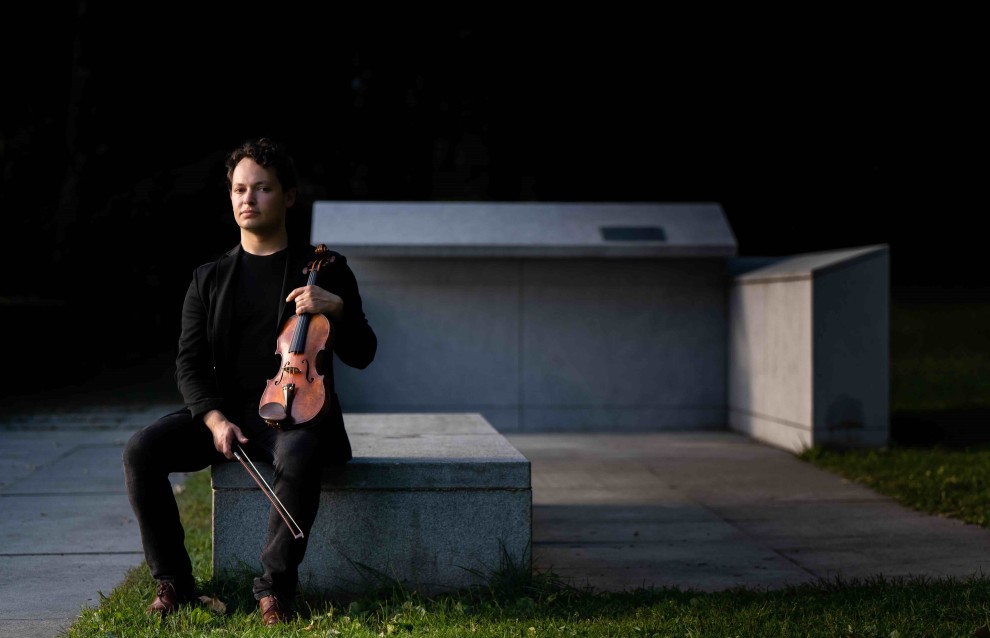 On Thursday, February 11 at 7 p.m., violinist Yevgeny Kutik launches “Finding Home: Music from the Suitcase in Concert.” This five-episode docu-recital series is based on Kutik’s 2014 album Music from the Suitcase, a reflection on his family’s emigration from the former Soviet Union and resettlement in the welcoming Jewish community of the Berkshires.

Each 30-40-minute episode was filmed at the Shalin Liu Performance Center in Rockport, MA, and features music performances, including works from the album, interwoven with Kutik’s personal narrative storytelling.

The episodes will be streamed cost-free and will premiere weekly on Kutik’s Facebook and YouTube channels every Thursday at 7 p.m. beginning on February 11 and running through March 11. You can register to view each episode on Kutik’s website for the series: musicfromthesuitcase.com/episodes/. Registrants will be emailed the links to watch by 5 p.m. on Wednesdays.

In 1989, when Yevgeny Kutik was five years old, he and his family emigrated from the deteriorating Soviet Union to the United States with the help of the Jewish Federations of North America. Although they had to leave most of their possessions behind and fit everything else into just two suitcases, Kutik’s mother, a violin teacher, filled one of the suitcases with sheet music from the family’s collection, believing that their music was a significant part of their family’s musical history.

With the help of the Jewish Federation of the Berkshires, he and members of his extended family became part of our community, which resettled more Jews from the Soviet Union than any community its size in the United States. Our dedicated community members followed through to ensure that those families were able to adjust to and thrive in their new home.

Years later, Kutik began to explore the music from the suitcase and was enthralled with the pieces he discovered. He recorded a selection of this music on his critically acclaimed 2014 album, Music from the Suitcase: A Collection of Russian Miniatures (Marquis Classics), which debuted at No. 5 on the Billboard Classical chart and was featured on NPR's All Things Considered and in The New York Times.

Each episode revolves around a theme of “finding home” as Kutik explores anti-Semitism in the Soviet Union, his family’s months as “stateless” refugees, the amazement and challenges of starting a new home in the United States, his teachers and mentors, and lessons for the future. The final episode will feature a musical tribute of thanks to his community.

Kutik explains the inspiration for this docu-recital series:

In 2020, as the pandemic canceled concerts and upended plans for the foreseeable future, I was in search of inspiration. As I began sifting through these musical pages that my family brought over, it dawned on me that as difficult as this pandemic and resultant loss of opportunity was, with strength and determination, there would always be a way to begin again, to rebuild from nothing, as so tangibly represented by these scores.

I spent the quiet months of quarantine collecting memories and stories from my family, looking through family photographs, and at the same time, for my own enjoyment, playing through some of my favorite scores from school and concerts over the past years. I began to realize that much like the collection of music my family brought over, I now had my own sheet music, representing my journey thus far: a semblance of a musical “home,” and of teachers, memories, and community.

“Finding Home: Music from the Suitcase in Concert”

A glimpse at the structural, historical anti-Semitism in the former USSR; Kutik’s family decides to leave the Soviet Union in search of a better life; an introduction to the 'music' from the suitcase. Featuring Achron's Hebrew Melody, Shostakovich's Sonata No. 2, and Stravinsky's Divertimento from a Fairy's Kiss.

A look at the strange and stateless journey through Europe which millions of Soviet emigres undertook to start a new life; applying for asylum; an awful recollection from the USSR. Featuring Tchaikovsky's Swan Lake, Khachaturian's Nocturne, and Bloch's Baal Shem.

Kutik’s family arrives in the United States; a closer look at rebuilding everything from nothing; the incredible power of community and selflessness. Featuring Rubinstein's Romance, Achron's Hebrew Lullaby, Shostakovich's Romance from Ovod, Prokofiev's Waltz from Cinderella, and Sviridov's Children's Album.

A tribute to the teachers and influences who helped Kutik and his family grow and build; remembering Zinaida Gilels and Roman Totenberg. Featuring Prokofiev's Sonata No. 2 Op. 94a, and Darius Milhaud's Le Beouf sur le toit.

Reflecting on his family's journey, one small journey among millions; a musical tribute of thanks to Kutik’s community. Featuring Rachmaninov's Vocalise and Franck's Sonata.