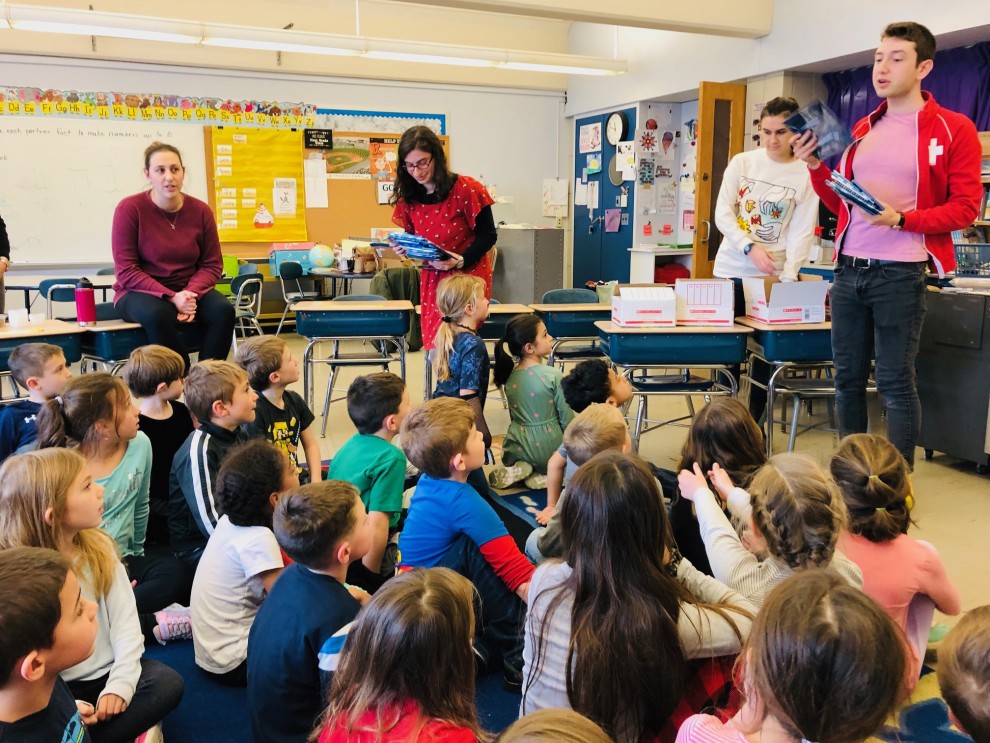 By Emma Lezberg / Special to the BJV

Sure, it’s right in the middle of finals period, but what better study break than playing dreidel with first graders?

Every December—December 9 and 10 this year— a group of students from the Williams College Jewish Association visits Brayton and Greylock Elementary Schools in North Adams to teach their first graders about Chanukah. The excitement of the students was palpable as we—Ariel Koltun-Fromm ’20, Regina Fink ’22, Melvin Lewis ’22, Tali Natter ’23, Mira Sneirson ’23, Molly Polk from the Williams College Center for Learning in Action who helped to organize the trips, and I—walked into the classrooms carrying mysterious boxes. One box contained the Chanukah paraphernalia we were to show them: The Magic Dreidels book to read, two menorahs to pass around, and a bag of dreidels for the students to use. All the other boxes contained surprises for the end of our hour together: a book for each child to take home, purchased jointly by the Jewish Association and the Center for Learning in Action and wrapped as presents during our Chanukah party at the Jewish Religious Center the Sunday before.

The students gathered on the rug at the front of the classrooms, and we told a G-rated version of the story of Chanukah, focusing more on the miracle than the war. After fielding a number of questions—Why did one of our menorahs have a Jewish star on it and the other didn’t? Do latkes have cheese in them? Did we get presents all eight nights?—we read a book introducing dreidels and wrote the letters on the whiteboard. At both schools, it took the students a few tries to figure out what language these strange symbols were in—Chinese? Japanese? Spanish?—but eventually they came up with Hebrew.

The students then split into groups to try playing dreidel, and the Williams visitors and first grade teachers floated around to help. In one group I played with, the students closed their eyes each time anyone spun and said, “I hope we all get gimmels! I hope we all get gimmels!” and lent their peers extra coins when they ran out. We then had the students gather back on the rug and handed out their presents. Three…two…one…open! They tore open the packaging and gasped, immediately comparing with their friends and asking us to read their books to them.

Seeing children this excited for books was heart-warming, and we are so grateful to their teachers for welcoming us into their classrooms and setting aside precious class time to introduce students to our holiday. We headed back to campus rejuvenated, ready to hit the books once again.

Emma Lezberg, a 2016 Pittsfield High graduate, is a senior at Williams College and the Tzedek Director for the Williams College Jewish Association. In addition to this Chanukah elementary school outreach, she leads a Challah for Hunger program, baking and selling challah to raise money to combat food insecurity locally and nationally, as well as National Refugee Shabbat and other service and social justice initiatives.