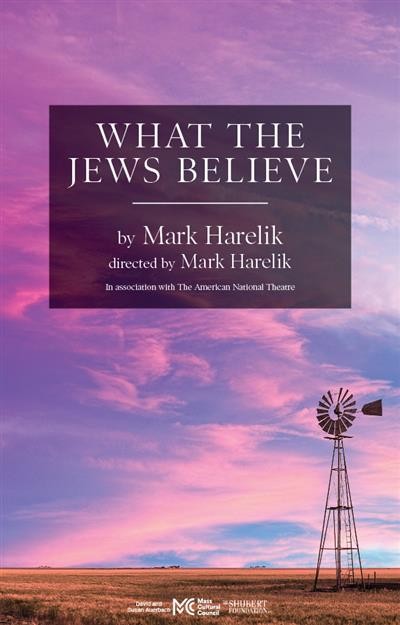 Subhead: Mark Harelik directs his own play about his father’s crisis of faith at the Unicorn Theatre this fall

STOCKBRIDGE – When one thinks about European Jewish immigration to the United States in the early 20th century, the image that readily comes to mind is of Ellis Island and Lower East Side tenements. The minority of Jews who entered the US through ports of entry beyond the East Coast had an entirely different experience of America, however – the rural heartland provided those families with other opportunities and other Jewish narratives.

In The Immigrant, written nearly 30 years ago, playwright and actor Mark Harelik portrayed his grandfather Haskell’s life in the tiny hamlet of Hamilton in central Texas, where he and his family were the only Jews in town. Haskell was one of approximately 10,000 participants in the Galveston Plan that, beginning in 1909, diverted Jews from crowded East Coast metropolises to the small port city on the Gulf of Mexico. The idea was that these immigrants would use Galveston as a springboard to explore economic opportunities in Texas and the Midwest.

In his latest play, What the Jews Believe – which receives its Berkshires’ premiere at the Berkshire Theatre Group’s Unicorn Theatre on September 28 – Harelik picks up the story in the next generation, with his own parents’ struggles to sustain their family’s Jewish identity and spiritual connection after decades of living in Texas, still the only Jews in town.

In August, Harelik spoke to BJV editor Albert Stern about What the Jews Believe, which he is also directing. This is an edited version of their conversation.

What do people who have not seen The Immigrant need to know about What the Jews Believe?

Nothing – what the new play’s about and the ramifications [of earlier events] are all contained in the new production. My grandfather, Haskell, left his bride and family behind in Eastern Europe, and arrived in Galveston. With the ten cents he had, he bought a bunch of bananas, and soon got some kind of conveyance and developed a banana peddling business in Galveston, selling the fresh bananas and subsisting on the rotten bananas. Just a classic, classic story of how you get started in America. He worked his way up to a business selling fruits and vegetables, and followed the train lines to central Texas.

He settled in the little town of Hamilton, and was basically alone and poverty-stricken. He made friends with a local banker – I have a feeling there was a need for him to do so and some mercy was applied. My grandmother joined him, and they developed a relationship with the banker and his wife. So I wrote a 4-character play about them.

The Immigrant followed 35 or 40 years of their lives, from my grandfather’s arrival in the small town through World War II, when he and my grandmother have just sent all three of their sons into the service. When we leave the play, we don't know if those 3 boys survived their tour of duty, but only that Haskell felt that in return for the gift of freedom and dignity and opportunity that America had provided to him,  in recompense he, like Abraham, was prepared to sacrifice his sons. The ultimate sacrifice, the ultimate gesture of paying back. Not only to his country but to his God as well.

The inside of my grandparents' house was definitely a Jewish household. But my grandfather’s grocery business gradually evolved into a a dry goods store selling retail clothing. Saturday was his big business day because that's when the farmers would come into town, so there were many aspects of Jewish observance that my grandfather felt were necessary sacrifices. He stopped keeping kosher,  he stopped keeping his head covered. He worked on Shabbat. Both of my grandparents gave generously to all the churches in town and, believe me, in small-town Texas, there are a lot of churches, a lot of different denominations. Haskell ended his life as a pillar of the community, and I was blessed to grow up in this town where Jews were not only respected but they were admired. It's possible that if there had been a 100 of us that moved to Hamilton it would have been different. But I guess I never encountered anti-Semitism because of my grandfather.

We joined a nearby synagogue in the city in Waco which even these days is about an hour-and-a-half away by car. We joined the congregation that was the more conservative of the three Jewish synagogues in town and when my grandfather stepped through the doors, he was stepping back into his 19th century Jewish world. He sat along the eastern wall and he davened.

My grandparents passed away, and then there was my father, raising me and my siblings in this small town. With the passing of his parents also passed a connection with the Jewish world  -  and I don't just mean with a synagogue, I mean with the world of ancestors, that feeling of having a living link with your ancestral past. And it wasn't a conscious decision on anybody's part; that was just how things happened. One more mystic chord of memory that severed.

Yes. I remember we asked our rabbi how many of the 613 mitzvot are we supposed to obey. Our rabbi said, “Well, all of them.” He said to me the Torah was literal and fundamental and you either believe it or you don't believe it. And this was not practical. It's theoretical.  You can choose to believe or not to believe something that’s theoretical. In times of crisis, in times of deep need [like my mother’s illness], what we actually do believe becomes the crucial question of the moment. Sometimes what we believe is what gets you from one minute to the next.

You obviously felt a need somehow to continue your family’s story after a 30-year gap. What brought you back to it?

In the case of The Immigrant, since I grew up idolizing my grandfather because of what he achieved and what he endured, I just wanted to tell the story of this man and somehow convey that in every family there is a man or a woman who is your family's hero. I would say especially for the Jews - but now we can say pick any immigrant group - the hero is that first person who is able to cross the border and make a life in America. You ask yourself, “Would I be able to do the same thing?”

Well, the same thing was true about my dad. I marvel at how my dad survived this period in his life and how he was able to either balance or not balance or endure what was it like for him. How did he negotiate these waters? That play is What the Jews Believe.

The blurb on my PR material says it is a story about the loss of faith and the journey to find it. Was that your father's journey?

My dad found himself unable to answer the questions about “what do we believe about [fill in the blank]”, and the play is about the nature and function of belief. Is it something that we carry on an intellectual level that we have words for, so that we can say “We believe in this, we believe in that - we don't believe in this we don't believe in that”? And then belief also exists on another, non-cognitive level. That has to do with how we feel in our body, how we feel with each other, and how we feel in the world. In lining up the head to the heart, when sometimes the two are very much at odds. By telling my father's story, what I end up discovering is that the nature of belief is very, very, very intangible. It's very easy to say that you believe something, but it's very difficult to actually believe in something.

How did What the Jews Believe make it to the Berkshires?

Kate McGuire [artistic director of BTG) and I were discussing where in the calendar year to present the play, and she said she would like to present it in the month of the High Holy Days. I said no one's going to be in the theater on those particular days or evenings, but she said it won’t be that much. I also said that the play might be considered intellectually incendiary by the very audience who you would like to present it to, and she said: “No, no that's exactly why I chose this time of year, because the Jewish community in our surrounding area is highly intellectual and questioning and open to strong ideas.”

I told her that OK, but she may be constructing the perfect storm. And she said: “I hope so.”

What the Jews Believe, written and directed by Mark Harelik, will be at Berkshire Theatre Group’s Unicorn Theatre (6 East Street in Stockbridge) from September 28 through October 20. For tickets and information, visit www.berkshiretheatregroup.org