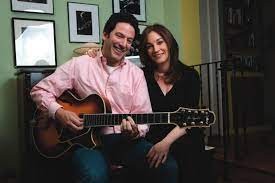 The Jewish Federation of the Berkshires annual Major Donors Celebration jazzes things up this year with an online evening with the married co-hosts of Radio Deluxe, renowned guitarist John Pizzarelli and acclaimed actress and singer Jessica Molasky. This virtual event takes place on Tuesday, July 27 at 5 p.m.

This special celebration will highlight the tremendous impact major donors have on building and sustaining Jewish life in the region. Major donors support the Federation with a minimum gift of $1,000 to the Annual Campaign.

“We are blessed to have such a diverse group of supporters who understand the unique challenges a small community faces,” says Executive Director Dara Kaufman. “This event is special every year, but this year, in particular, we are celebrating! Our major donors have invested in strengthening our community, and it is that strength that helped us navigate through an unprecedented crisis.”

“We rely on the generosity of donors to provide essential services and support to the greater Jewish community in Berkshire County and abroad,” says Development Officer Janet Lee. “By giving to the Federation, you are making a difference. In this small community, we are all connected, and helping one another, especially during difficult times, is truly a mitzvah.”

“It is mind-boggling how we do all the things we do,” says Anne Schnesel, this year’s Major Gifts chair, about the Jewish Federation of the Berkshires. “But most impressive – and important to me – is that everything we set out to do, we do.”

Anne points to how nimbly and effectively Federation responds to challenges:

What amazes Anne is that while other, larger communities rely on a network of Jewish agencies to support the community, in the Berkshires, Federation takes on these challenges on its own, leveraging its small staff and the commitment of volunteer leaders and partners within the Jewish community to achieve ambitious and often urgent goals.

She observes that there is no script that says that Federation’s programs will necessarily succeed – just that, thanks to a deep understanding of the community’s needs, hard work, and thoughtful implementation, they do. And the impact of those programs reaches people of all ages.

Anne, who was raised in an Orthodox home in Brooklyn, says her Jewish philanthropic involvement began early on during her marriage to her late husband, Ernie, who passed 7 years ago. The couple became involved with the Reform movement and both held leadership roles with B’nai B’rith in Long Island, NY. “That experience showed me what community can do, how it works,” she says.

She and Ernie’s first foray in Berkshire life was a vacation residence in the Leisure Lee development in 1981, but after a few years, she remembers, “we moved to North Egremont and bought a home.” Although still raising their three daughters in New York at the time, the couple knew that the Berkshires represented their future, but wondered what their level of engagement with the life of the local community might be.

“We knew we could be involved or not be involved,” says Anne. “We were in a position that we could do whatever we wanted. What would it be?”

The Schnesels opted to get involved. They were a part of the construction project that established Hevreh of Southern Berkshire’s permanent home in Great Barrington. “We saw how we made a difference here,” she recalls. “We saw a building emerge.”

Guided by their friend Rabbi Jack Stern, also a member of Hevreh, the Schnesels widened the scope of their local philanthropy and became passionately involved with Construct Inc. (which shelters and aids families and individuals struggling with housing issues in South County) and HospiceCare of the Berkshires. And again, says Anne, “we saw the huge difference that bigger fish in a small pond can make.”

Anne Schnesel’s involvement with Federation started many years ago. Inspired by the impact that this organization has in the Jewish community, she joined with Jane Glaser in co-founding the Jewish Women’s Foundation of Berkshire County. For the past 12 years, the Foundation has provided grants to address unmet needs throughout the Berkshires, and Anne still sits on its board. It’s another example, she says, of how a small group of dedicated people can make a huge difference in the life of a small community.

As a mother, grandmother, and great-grandmother, Anne says that what matters most to her Jewishly is “continuity” – establishing a lasting approach to community-building that embodies and perpetuates Jewish values and engagement now and for future generations. In the Berkshires, Federation is instrumental in keeping the Jewish community together and passing on our values to the next generation.

Anne feels that Federation’s emphasis on supporting engagement opportunities like PJ Library, local Hebrew schools, camp and Israel scholarships, Hillel at UMASS, and Birthright are critical in this effort. “When youth have access and exposure to meaningful and authentic Jewish experiences,” she says, “they can see a variety of Jewish identities, ways to be involved, and leadership opportunities available to them. Then they’re empowered to live their Jewish values and connect in the ways most meaningful to them.”

Anne says she most wants donors to understand that: “The Jewish Federation of the Berkshires is working 12 months each year whether we may be here in the Berkshires or not. The needs are consistent and Federation is consistent in meeting them, using our gifts in a meaningful way. Federation provides a continuum of services in the best of times and in the worst of times – and we just came through the worst of times. Look at how Federation performed. I encourage all of our donors to make the most generous gift they can to support the important work of this very worthy organization.”

To this year’s host committee, Elisa Schindler Frankel, president of the Jewish Federation of the Berkshires, writes: “Thank you for stepping up to engage with your fellow community members by sharing your enthusiasm for our Federation, and for demonstrating your ongoing, meaningful commitment to our important work. Our major donors provide this small Federation vital support that allows us to accomplish all that we do for the Jewish community in the Berkshires, a place we all cherish.”

About John Pizzarelli and Jessica Molasky

World-renowned guitarist and singer John Pizzarelli has been hailed by The Boston Globe for “reinvigorating the Great American Songbook and re-popularizing jazz.” The Toronto Star pegged him as “the genial genius of the guitar.” And The Seattle Times saluted him as “a rare entertainer of the old school.”

Established as one of the prime contemporary interpreters of the Great American Songbook, the almost impossibly in-demand Pizzarelli has expanded that repertoire by including the music of Paul McCartney, Joni Mitchell, Neil Young, Tom Waits, Antônio Carlos Jobim, and The Beatles. Pizzarelli also recorded with McCartney, playing guitar on the Songbook tribute album Kisses on the Bottom.

His themed shows, often performed with his wife Jessica Molaskey, have received stellar reviews. The New York Times called their “My Generation” show “brilliant,” raving the couple “embrace the present, or what used to be the present, and reflect on the passage of years. An earlier rave noted, “The ability to infuse pop and jazz with a Chekhovian wisdom about life’s ups and downs is the special gift of John Pizzarelli and Jessica Molaskey, long-married musical partners whose work gets deeper each year.”

Jessica Molaskey is a veteran of a dozen Broadway shows including the revival of Stephen Sondheim and James Lapine’s Sunday in the Park with George, which was nominated for nine Tony Awards. She has appeared in A Man of No Importance at Lincoln Center, Parade (directed by Hal Prince), and a critically acclaimed production of The Most Happy Fella at City Center. Ms. Molaskey has five critically-acclaimed, solo CDs and has performed in concert from Lincoln Center to Carnegie and Disney Hall to the Montreal and Monterey Jazz festivals.

Expect to be entertained at our Major Donors Celebration!