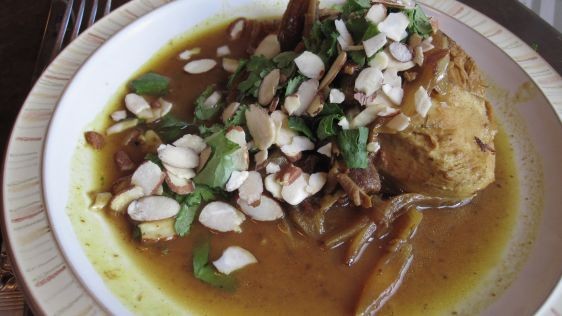 As anyone who reads this column regularly may guess, I love to travel. And, much of what I love about traveling to points around the globe is sampling the amazing variety of native foods and flavors.

So, since we can’t really visit places much farther than a gas tank’s capacity right now, why not do it in our kitchens? And, while we’re imagining our tour, why not “meet” some members of the Tribe.

Let’s start our global trek in Morocco. Jews have been present in Morocco for two and a half millennia, tolerated under heavy taxation in the best of times, persecuted and executed during the worst.

The first recorded presence of Jews in Morocco was in the 8th century under Carthaginian rule. Their numbers grew between the 8th and 12th centuries, and Fez was a particularly attractive destination due to its diverse and tolerant population. A golden age for Fez Jews lasted for almost three hundred years.

The next couple of centuries saw a somewhat tolerant Almoravid rule, although Jews lived under dhimmi status, meaning “protected person.” As non-Muslims, they were required to pay special taxes in exchange for being able to practice their religion.

But in the middle of the 12th century, the militant Almohadi dynasty overthrew the Almoravids and, in a dark foreshadowing of things to come, forced Jews to convert to Islam or face death. And, again an omen of future oppression, those who did convert were required to wear a yellow head covering that exposed them to scorn and violence.

Then in 1492, following the fall of Granada, Spain completed its Reconquista, and King Ferdinand and Queen Isabella of Spain issued the Alhambra Decree that ordered Jews and Muslim to convert to Christianity or leave the country. Portugal followed suit just four years later. While about 100,000 converted, another 175,000 Jews of the Iberian peninsula refused to betray their faith and were summarily exiled. About 20,000 sought refuge in Fez alone, where local Jews gave assistance to the refugees, including helping conversos to reclaim their Judaism.

The sheer numbers of Sephardim overwhelmed the tiny Jewish community and, as might be expected, some culture clashes ensued. But, over time, as local Maghrebi Jews and Sephardim intermarried, Sephardic traditions became the norm.

Before the establishment of the modern State of Israel in 1948, Morocco was home to over a quarter million Jews. Today, there are only 2,000.

If there is one food that conjures up images of camel caravans, desert oases, fragrant spices, and coffee boiling over an open fire, it is the date. Often referred to as “the king of dates,” the Medjool was once actually reserved for Moroccan royalty. This recipe conjures up an exotic night in the Maghreb.

Add half the chicken to pot and cook until browned on all sides, turning occasionally, about 15 minutes.

Transfer chicken to large platter and repeat with the remaining chicken.

Pour off all but 2 tablespoons of the fat from the pot and discard.

Add garlic cloves to the pot and sauté until golden, about 6 minutes.

Stir until fragrant for about 1 minute.

Increase heat to high and add broth and 3 tablespoons of the lemon juice.

Bring to boil, then reduce heat to low. Cover and simmer until the garlic begin to soften, about 15 minutes.

Place chicken on top of garlic in the pot and bring to boil over medium heat.

Reduce heat to medium-low, cover, and simmer for about 25 minutes.

Transfer chicken and garlic to platter; cover with foil. Place in cold oven and set to 250 degrees to keep warm while sauce is cooking.

Boil juices in pot until slightly thickened, about 10 minutes. Stir in dates and the remaining 2 tablespoons lemon juice.

Reduce heat and simmer gently until dates are heated through, about 2 minutes.

Pour sauce and dates over chicken. Sprinkle with almonds and parsley, and serve on a bed of couscous.