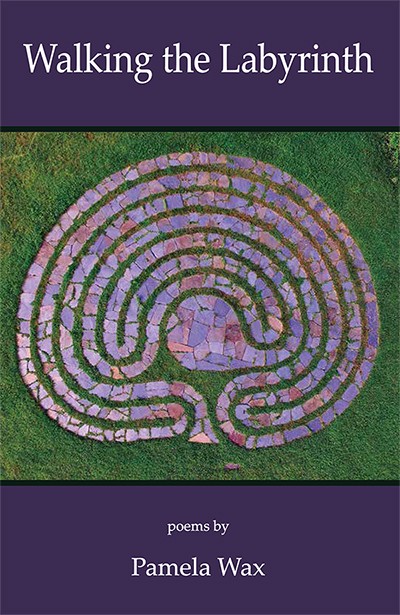 After winning a poetry award and appearing at a 1986 poetry event with Adrienne Rich and Ellen Bass in Santa Cruz, CA, Pam Wax remembers getting scared about the possibility of being a poet. In her early 20’s, she feared both the loss of “the muse” and not having a reliable income. Instead, she became a rabbi, wrote sermons, published essays, and took a lot of memoir and fiction writing classes.

Now, 35 years after that first poetry award and reading, Wax’s first book of poetry, Walking the Labyrinth, will be published. The final—and longest—poem of the collection, “Gleanings from the Field,” was written all those years ago; Wax, however, wrote nearly all of the other poems over the past three-and-a-half years following her brother Howard’s death by suicide. “Writing poetry grounded me through the grief,” Wax says. “It held and comforted me, and along with morning minyan, gave me a container and a structure for meaning-making.”

Her manuscript was a finalist in a contest held by Main Street Rag Publishing in North Carolina, which will publish the collection in the Spring of 2022. The title poem, included here, received an honorable mention in the Robinson Jeffers Tor House Poetry Prize judged by Kim Stafford.

Rabbi Wax is the Spiritual Care Coordinator at Westchester Jewish Community Services in White Plains, NY, and lives in both North Adams, MA, and the Bronx, NY, with her husband, Chaim Bronstein. She is a member of Congregation Beth Israel in North Adams (where she served as rabbi from 1996-2000), Knesset Israel in Pittsfield, and B’nai Jeshurun in Manhattan.

Rabbi Wax and Rabbi Rachel Barenblat, author of Crossing the Sea, will in conversation about grief poetry and writing through the tough places at a special event sponsored by Congregation Beth Israel on Sunday, January 9 from 7:30-9 p.m. They will talk about the tradition of writing about loss through the poetic form and share some of their poems and process.  Contact Ollie Jones at CBI for the Zoom link, cbinadams@gmail.com. If there is interest, a writing-about-grief workshop may form from this gathering.

Walking the Labyrinth can be pre-ordered at a discounted price until its publication at mainstreetragbookstore.com.. The book’s cover features the Al and Frances Small Memorial Labyrinth on the property of Congregation Beth Israel in North Adams.

Walking the Labyrinth
by Pamela Wax

I am a connoisseur of labyrinths. I can tell
you about the ancient drawing with Jericho
at the center, suggesting that the walls

came a-tumbling down because of a
parade of seven circuits, a merry-go-round
of intention. What we do here stirs

heaven to act. Tiny finger
labyrinths were carved into walls outside
old country churches in Europe,

so supplicants might ground themselves
for the sacred within, a prayer before prayer.
I could explain how a maze

confounds, a labyrinth uncovers
the self, meditation in motion. It resembles
a womb, a brain, a fingerprint, the revolving

planets, the primal and timeless. I weave
and spiral like Ariadne across the length
of a football field contained within a 42-

or 20-foot or 5-inch round.
I might carry a question lightly in the back
of my throat or a prayer

tucked between my breasts.
I may be in a candle-lit rectory in the Bronx,
following a unicursal path branded

in black paint on a waxed parquet floor,
or inhaling an autumn Berkshire landscape
while weaving in lanes drawn

by shrubs, string, or stones.
I could be prancing barefoot on grass
or solemnly marching to the cadence

of a dirge-like owl demanding answers
to unknowable pain. Sometimes I create
a Cretan-shaped labyrinth on a blank

page starting at an intersection
of four straight corners, then fill
in seven concentric circuits, one arc

following another, rainbows radiating,
seeking the Eureka of wisdom
that King Solomon honed on his daily

constitutional through a whorling solar system
on his palace grounds, seven orbits
of stepping holy, holy, holy into the whole

world of God’s glory, while he composed
love songs and proverbs.
I am superstitious but not fussy

about my labyrinths if they get me
where I’m going, which is now here
and nowhere in time, mindful not to cross

boundaries—ethical or spatial—to finish
what I begin, and to remember that the one
way in is the only way out.