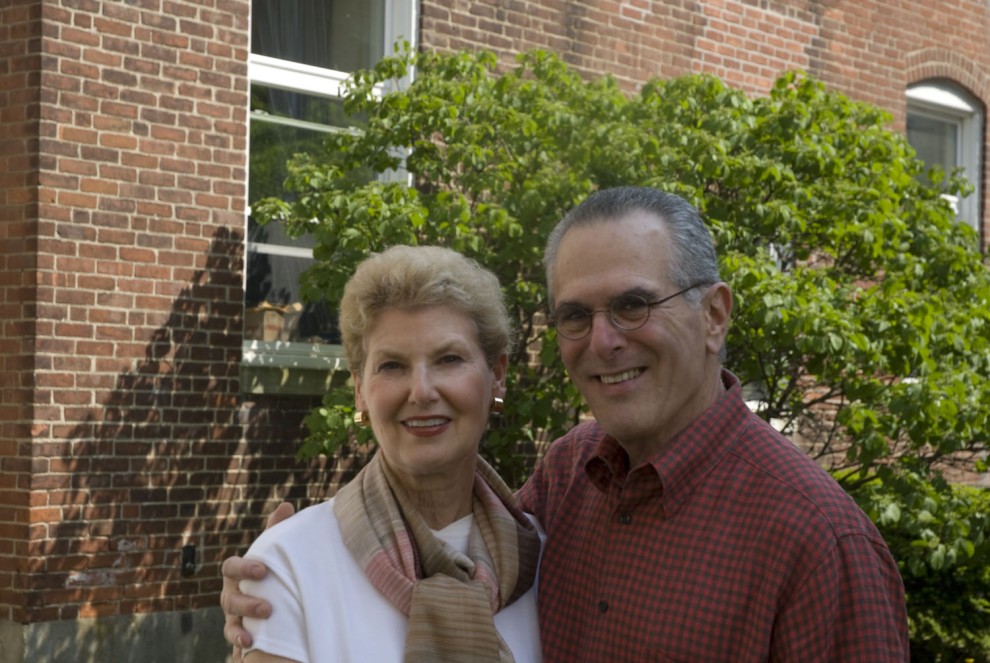 Villages of the Berkshires is a local non-profit organization that is a part of the national Village-to-Village network, a grassroots movement of older Americans who wish to remain active and in their homes as they age. Operating on a membership and volunteer model, each local Village – there are 230 nationwide –  addresses the specific needs of its community, providing interpersonal connection and access to resources and services to those who join.

Howard and Shirley Shapiro of Lenox started Villages of the Berkshires (villagesoftheberkshires.org) in 2019. The couple has long been active in the Jewish community, and Howard (by training a clinical psychologist and who worked in the non-profit sector as president of United Ways in Michigan and New Jersey) has held leadership roles at Temple Anshe Amunim and the Jewish Federation of the Berkshires. Shirley worked as a learning disabilities teacher, consultant, and professional advocate. The Shapiros say they undertook the Villages project because they recognized that there was a clear need for it in Berkshire County, where approximately 40 percent of the population is 50 years old or older. They’ve worked to obtain grants and other funding sources, partner with local groups, and engage with the community to obtain new members and volunteers.

The BJV spoke with Howard and Shirley Shapiro about Villages in the Berkshires in October. The interview has been edited for length and clarity.

BJV: Part of the motivation you had for starting The Villages of the Berkshires came from reading the book Being Mortal by Atul Gawande. What about the book affected you?

Howard Shapiro: The book dealt mostly with fundamental medical kinds of issues or how we live our lives as we grow older from the perspective of illnesses or end-of-life concerns. Gawande also writes about his father, who lives in Athens, Ohio, having contracted cancer and his recovery. After he came home, the family learned about a ‘Villages-to-Village’ in Athens, which is how I found out about the concept. The first one was in Boston, Beacon Hill Village. Shirley and I looked into it, and it was at a time when we were thinking to ourselves, what are we were going to do. Are we staying in this house? Do we need to look for different kinds of living arrangements like assisted living or a senior residence? We really love our home and want to remain here, but we knew that we, over time, would lack the ability to manage some things, whether that was doing something in the house or perhaps driving ourselves. And so as we explored the Villages, we learned that this was happening all over the country.

Shirley Shapiro: One of the things that prompted us to think about putting together something like the Villages was that we have no young family around. Our children and grandchildren live far away, and should we need somebody [in an emergency], it’s particularly scary. But other reasons are mundane kinds of things that we all face in running a household. It’s important that we think carefully about how we’re going to structure our lives for the next few years.

BJV: Do you find that people think ahead, or mostly just live their lives until something happens that prevents them from doing what they want to do?

Howard Shapiro: People don’t want to face it and we didn’t want to face it. One of the biggest issues we have about finding members is the number of people we meet who will say to us, ‘we’re not ready for that yet.’ And in many ways that is probably true – but our concern was if we didn’t do something about setting up [Villages of the Berkshires] was that it wouldn’t be here when we did need it.

But you know, some of that has changed a little bit since we started because of COVID-19 and the fact that people are isolated and staying at home. As such, they’ve dealt with the idea that maybe they do need something like this.

Shirley Shapiro:  From our members, we’re learning more and more about many kinds of needs that had to be filled. Almost daily, people will call in and ask, ‘Do you have a person who can help me learn to develop my computer skills? Do you have anybody who will drive me if I have to visit a friend on the other side of the county? Is there anybody who can pick up groceries for me or medications at the pharmacy?’ A lot of needs are coming to the fore, and we are looking at each other in the early stages of this Village and saying we need some people who will volunteer. We need young people. We need our membership to volunteer in certain ways. We have to be ready with certain kinds of solutions to the needs that are being brought to our attention.

BJV: Please explain the concept of membership. I see that it’s cost-effective - $360 annually for an individual or $540 for a two-person household.

Howard Shapiro: The reason for the membership is that we wanted to become a nonprofit and hire staff because we didn’t want to depend on people like ourselves to continue to run the organization. If you want to become part of the [Villages] network, if you want to buy software, you need money coming in. We held focus groups asking the question, ‘What’s a reasonable amount of money to charge?’ Many villages start charging much more than we are.

The membership fees were only covering somewhere around 40 to 50 percent of the total cost of operations. It is clear to me from putting together budgets and getting it set up that we are going to need other resources, and that was one of the reasons to go after grants, and that was another one of the reasons why we’re looking at a whole fundraising model that we’ll use for getting support from the community in large.

We’ve been very concerned in this community that, with its diversity in terms of income, that we not exclude people. And so we have built in the intent that as we raise money, we will put money aside for people who can’t afford the membership fees.

Beacon Hill Village was getting so many questions from other communities that they actually founded the Village-to-Village network. We joined with what is called an opportunity membership for $150, and they have a vast array of materials. It helped us save so many hours of work just following their toolkit and working through that process as well.

We decided to start with a village that includes Pittsfield, Lenox, Lee, and Stockbridge. We envision that we will be what is known in the Village movement as a hub and spoke where Villages of the Berkshires will be the hub, but other villages will develop and become part of us. We will be the administrative arm, and that’s already started a little bit in South County. We held information sessions and have a list of over 200 people who have shown interest either as volunteers, members, or both.

BJV: You developed a partnership with OLLI (The Osher Lifelong Learning Institute at Berkshire Community College), which led to your receiving a grant from the federal government.

Howard Shapiro: We formed a partnership with OLLI early on because we knew that most other Villages around the country were doing things in the area of education and socialization, and we knew that here [in the Berkshires], we already had an organization doing that and it didn’t make any sense to duplicate what they were doing.

A grant we received early on from the Tufts Health Plan Foundation allowed us to hire a part-time program director, and she’s beginning to get the word out, as well.

BJV: If all goes well, how do you see this developing in the next 5 years? What has to happen in order for your concept to succeed, and what is your vision of success?

Howard Shapiro: That is not an easy question to answer in light of what’s happening all around us at this point. I guess my vision would be that in five years, there would be, say, 3 or 4 villages around the Berkshires, all part of us. That we would have a membership from all those sources that numbered somewhere around 300 to 400 people. That we would have developed a sponsorship program that businesses were contributing to that would help us bring in members who had less ability to support us and that we have some regular grant funds coming in. That we would have intergenerational involvement with the Villages of the Berkshires.

Shirley Shapiro: In a way, [the pandemic has] created an opportunity for Villages because people will recognize that they will need some help. I hear people saying now, for example, ‘I don’t want to ever go into a nursing home if I’m going to face the problem of a disease that could affect me that way.’ I’ve heard that more often since COVID-19 than I ever heard before. People are hibernating in the truest sense, because of their fears. It’s really an overwhelming kind of tragedy. It’s been especially tough for people who live by themselves. One of our focus groups before COVID-19 showed that one of the biggest concerns people expressed was isolation and the lack of socialization and loneliness.

Isolation is one of the biggest concerns among seniors, and we have started finding ways for them to communicate with others – a simple thing that we call ‘the 6-Foot Stroll,’ where we have walks for our members where they can keep a distance from each other. Even at that distance, they are able to communicate with each other, and some tell us how wonderful it’s been to be in the presence of other people for a little bit of their day.

Howard Shapiro: You know, independence was considered the key to [aging successfully] for so many years. We’re not thinking like that anymore because some of that independence just isn’t going to happen for some people; but we want them to be able to talk about their own lives and how the Village can fill in some of those difficult decisions that they have to face perhaps as they begin to live alone.

I want to talk about this as a community effort, not just for older people. There’s a role for everybody in this. We didn’t put on how old you have to be to join, as many Villages have, because we felt there were people in the long term who want to join who still have families of home. We might be able to have volunteers who could be of help once we get back to normal schooling, for example, for families with two parents who are working and might need somebody to be available to be there to pick up the kids at the bus stop and be with them until someone got home. So that’s the other side of the kinds of things villages could do in the future; though we have focused on services for people who are older adults, that’s not the way it has to remain. I want to encourage people to understand that there couldn’t be anything better than creating some intergenerational communication between people in this environment from a volunteer point of view.

For more information, visit Villages of the Berkshires’ website at villagesoftheberkshires.org, or call (413) 327-4404. For information on the national Village-to-Village movement, visit vtvnetwork.org.