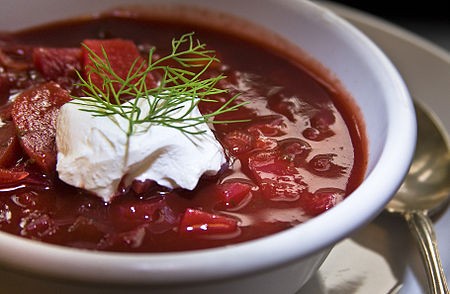 According to the CIA’s World Factbook, Ukraine, with 25 percent of all agricultural output in the former Soviet Union, has such a highly developed agricultural economy that the country has earned the moniker “breadbasket of Europe.” Ukraine’s exports of grain, potatoes, sugar beets, and sunflower oil are among the world’s largest. So, now we know why the thriving sunflower is a symbol of Ukraine.

We Jews have also lived, and sometimes thrived, in Ukraine for over a thousand years. As might be expected given our people’s history, some periods were good and some horrific. In one excruciatingly short period of the good times, 1917 to 1920, Yiddish was even one of the official state languages of the country and was even featured on Ukrainian currency, along with Russian and Ukrainian. And some of our most important religious and cultural movements, including Hasidism and Zionism, sprang from Ukrainian soil. And now, the president of Ukraine is a proud Jew. I pray that by the time this article is in print, that will still be the case.

Alas, the bad times were many, from the 17th-century Khmelnytsky Uprising massacres, to 19th-century antisemitic riots and blood libels, to the horrendous 20th century that witnessed both pogroms that killed close to 100,000 and the Holocaust, in which more than one million Jews were murdered by the Nazis and their Ukrainian supporters. The infamous Babi Yar, where over 33,000 Jews were shot and thrown into pits, is located just outside the capital city Kiev.

In large part due to its rich soil, even the poorest of the poor have been able to survive on the grains and vegetables that thrive in Ukraine, including our ancestors who developed what are now the traditional Eastern European dishes that make use of the potatoes, cabbage, mushrooms, and beets they grew. (This list sounds like the inventory of my bubbie’s kitchen.) And like everything else, Ukrainian cuisine is influenced by the various conquerors and occupiers of its land, as well as by the countries with which it shares borders: Belarus, Poland, Slovakia, Hungary, Romania, and Moldova.

While we’re all aware that Ukraine and Russia have been fighting over land, it turns out they’ve also been arguing about food. Among the many dishes that make up both native and Ashkenazi cuisine, one iconic food stands out, and it’s not only due to its vibrant red color that makes a dollop of sour cream turn a magnificent pink. In fact, Ukraine has appealed to none other than UNESCO, the United Nations cultural heritage agency, to recognize borscht as a national cultural treasure.

Of course, borscht is also popular in many of the other Eastern European countries our people have called home, such as Poland, Lithuania, and Latvia, and we Jews have created our own meat and dairy versions of the dish. This ruby red soup is so much a part of our culinary history that we’ve even had our own little piece of land named for it: The Borscht Belt.

But first, a little background. For generations, Eastern European peasants have filled their bellies with a thick soup made with a variety of vegetables such as cabbage, mushrooms, onions, and when family finances permitted, a piece of meat or bones. They would keep the pot going on the fire, adding new vegetables daily, and supplementing the meal with a hunk of rustic bread. But the vegetable that gave the soup its name was cow parsnip, or borshch in Russian. Not to be confused with the sweet white root vegetable parsnip, borshch gave the soup a sour tang.

Enter the deep red veggie that fills Manischewitz jars today. Native to the Mediterranean, beets were originally prized by the Greeks and Romans for their leaves, but around the middle of the 16th century Western Europeans began cultivating them for their roots. Since beets were able to thrive in the harsh growing conditions of Eastern Europe, they became a staple of the peasant diet. (And there were plenty of Jewish peasants living in shtetls throughout the area.) An added benefit of beets was that, like potatoes and onions, they could make it through the winter in root cellars, helping said peasants survive, as well.

But it was due to the beets’ natural sweetness that, around the mid-1500s, both Jewish and non-Jewish cooks began adding them to their soup pots to temper the tartness of the cow parsnip. Given the laws of kashrut, Jews developed both a vegetarian version that could be topped with sour cream, and a heartier one made with meat or chicken. Of course, there were regional variations to the mix. Some based their soup on cabbage. Others, like Galicianers, added sugar to their recipe, while still others added lemon juice for even greater tang.

And it was the Jews who added a “t” to call it borscht.

This vegetarian version of a traditional Ukrainian borscht is a refreshing soup to serve on a hot summer day.

salt and pepper to taste

1 teaspoon white sugar, or to taste

Fill a large pot with  2 quarts of water and bring to a boil.

Add the beets and cook until they have lost their color.

Add the carrots and potatoes, and cook until tender, about 15 minutes.

Add the cabbage and the can of diced tomatoes.

Heat the oil in a skillet over medium heat.

Add the onion and cook until tender.

Stir in the tomato paste and water until well blended. Transfer to the pot.

Add the raw garlic to the soup, cover and turn off the heat. Let stand for 5 minutes.

Taste, and season with salt, pepper and sugar.

Ladle into serving bowls, and garnish with sour cream and fresh parsley.