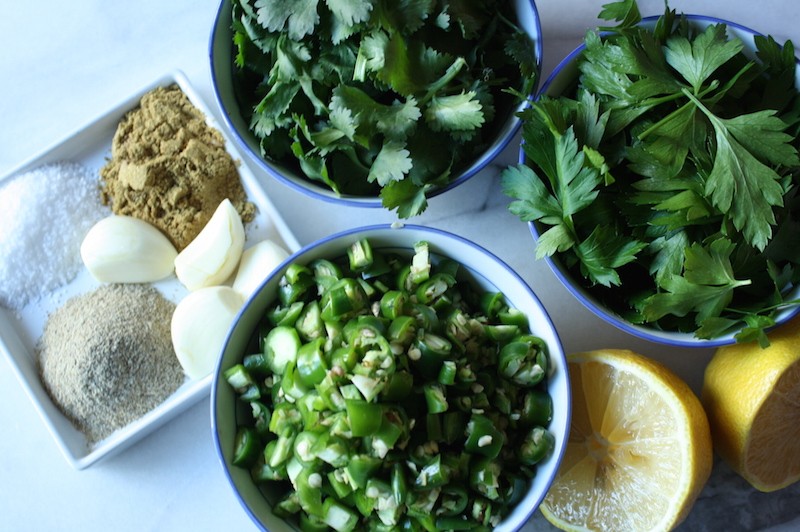 A few years ago, Joel and I accompanied a group of teens from Hadassah's youth villages on their mission to Poland. The trip, similar to our March of the Living, was the culmination of a year's study about pre-war Poland and the Holocaust. Like the population in our villages, the kids represented virtually every country in which Jews have lived. Students hailed from Ethiopia, Morocco, Russia, and Estonia, just to name a few.

The weather was beyond cold, at one point dipping — or should I say plunging — to 18 below zero. I noticed that Katya, one of the girls in our group, was standing with coat unbuttoned and open to the wind. She wore neither hat nor gloves.

Katya's smile hovered somewhere between amusement and tolerance. "Carol," she said, voice heavy with her Russian accent, "I am from Siberia. I am hot."

And the kids from the Mediterranean and Middle East? Bundled up top to bottom.

But regardless of where these kids came from originally, they all liked their food fiery. As we Jews lived in cold climates, hot and spicy condiments warmed us. In hot ones, they've opened up our pores and allowed perspiration to cool us.

So let's take a look at a few of the piquant and potent elements of our cuisine. I'll start with two Ashkenazi Old Country choices: horseradish and mustard. Known as chrain in Yiddish, horseradish is one of the stars of the Passover Seder in its role as maror, but in ground form it is an absolute necessity for deli-loving fressers. Often made with beets to render its distinctive crimson hue, it also comes in unadulterated white. I personally prefer the latter because it camouflages itself on a piece of gefilte fish. I like the surprise I get when biting into my fish. There's no shock with the red stuff.

If you've ever tried to grow it in your garden, you'll know that horseradish root is a hearty plant. And as here, it grew prolifically in Eastern Europe, where every part of it was put to good use. Our ancestors ground the root to make a cheap and easy relish, and they added the leaves to brining liquid to keep pickled cucumbers crunchy.

Many families have treasured tales of horseradish gone awry. Joel tells the story of his grandfather Jack deciding to make his own. Unfortunately, after loading the horseradish root and the beet into his blender, he neglected to secure its cover. When he hit the "on" button, it blew its top, sending scarlet horseradish all over the walls and ceiling of his kitchen. He then called his daughters to come to the house to clean it up.

As for mustard, our people have a long history with the tangy spread. Believe it or not, it's mentioned more than 200 times in the Talmud (but not in the Torah). Rabbinic discussion centers around planting, cleaning, and sieving. Even recipes appear, including one about mixing honey with mustard that I'm sure must have inspired the Snyder's pretzel people. In later years, Kabbalist Moshe Cordovero and the philosopher known as the Ramban both compared the universe to the size of a mustard seed. And biblical commentator Rashi believed that Abraham served tongue with mustard to the three angels who visit him and Sarah before announcing the impending birth of Isaac.

How Rashi came to that conclusion is a prime example of rabbinic thinking. When Abraham saw the men approaching, the Torah reports that he sent Sarah to bake bread while he went out to find a calf because he wanted to serve tongue with mustard sauce, considered a delicacy fit for a king. And given the Middle Eastern mandate for hospitality, it was also fit for strangers coming to one's tent. Calves are young and tender and, therefore, the best. And their tongues can be prepared quickly.

But Rashi claims that Abraham brought back three calves. How did the scholar come to that conclusion? He interprets the one cow in the Torah narrative as three because that many different words for the animal appear there.

Mustard arrived in Israel and to the rabbis there in part due to the Romans, because Rome occupied Israel for over half a century. And Romans liked their mustard. Although mustard seed had been in use since the time of the Egyptians, they were the first to popularize making a spread by grinding the seeds and mixing them with wine or vinegar.

Mustard is so much a part of our culture that Worcester native Barry Levenson founded the National Mustard Museum. Located in Wisconsin, the place displays over 6,000 varieties of the stuff, and even sponsors the World-Wide Mustard Competition. In one episode of pursuing his passion (obsession?), Levenson surveyed Jewish delis in New York, arguably the home of Jewish deli, and found that no two could agree on the variety of the condiment they preferred. Some insist that horseradish must be in the mix, while others insist on garlic.

As much as I love mustard it, like horseradish, can be quite potent. While visiting our daughter and her family recently, I took a large spoonful of Dijon mustard, normally a fairly tame condiment, to spread onto a sandwich. My sinuses will never be the same.

Then there are the Sephardi and Mizrachi hot sauces that can hold their own, and then some, when pitted against the Ashkenazi ones. Harif, the Hebrew word for sharp, is a general term and can include two main forms of hot sauce used by our extended family, such as harissa and schug.

As with horseradish, I think every family has its own harif story. Mine takes place in 1990, when we traveled with another family to Israel. On one of our first days of touring, we stopped in Beit She'an to have lunch. Joel and friend Howie took charge of ordering while the mothers watched our collective eight children.

Over the years, pining away for my youthful experience living in Israel, I had probably mentioned harif a couple of dozen times. Unfortunately, no form of the relish was available for purchase here in the States, or at least where I was living. So, whenever I served falafel, we had to make do with salsa.

Thinking I'd be delighted, Joel decided to dress my falafel sandwich with the harif offered at this little kiosk. And he really poured the stuff on. As a result, when I took the first bite of my stuffed pita, flames shot out of my ears. Joel went into the doghouse, to which he returns whenever I think of harif.

There's a reason that kiosk had a photo of the Rebbe hanging on the wall. Anybody partaking of that much harif would need divine intervention.

If I recall correctly, the harif at this place in Beit She'an was harissa. A very potent form of it. This particular hot sauce comes from our extended family in North Africa. Sometimes sweet and other times smoky, it is a flavorful chili paste made from peppers, garlic, coriander seeds, paprika, cumin, caraway seeds, olive oil, and lemon. Rather than blow your socks off immediately, some harissa will provide be a slow build-up of heat. The stuff in Beit She'an wasn't that kind.

From our Yemeni cousins comes schug, a green (sometimes red or brown) chili paste whose base is made from chilis, vinegar and oil.  The brown variety has green pepper and tomatoes. Not only good to spread onto falafel or sabich, schug goes well with anything from grilled meats to roasted veggies to eggs. Adding a dollop of sour cream or yogurt can help to tame the heat.

As with any recipe, there are dozens, if not hundreds, of variations of this Yemenite hot sauce. This one is adapted from that of award-winning chef and restaurateur, Michael Solomonov, whose book Zahav I reviewed in this column a while back. Solomonov has expanded the ingredients list significantly, and he includes fresh cilantro. Alas, I cannot tolerate the taste of that herb, so I don’t use it. If you love the stuff, by all means add one cup of it.

In the base of a food processor, combine all of the ingredients, except the oil.

Pulse until a coarse paste forms.

Transfer the mixture to a large bowl and stir in the oil.

Use immediately or store the schug in an airtight container in the refrigerator for up to 1 month.

* If you don't want your relish too high on the Scoville scale, make sure to remove the seeds from the chili peppers and/or use fewer of them.