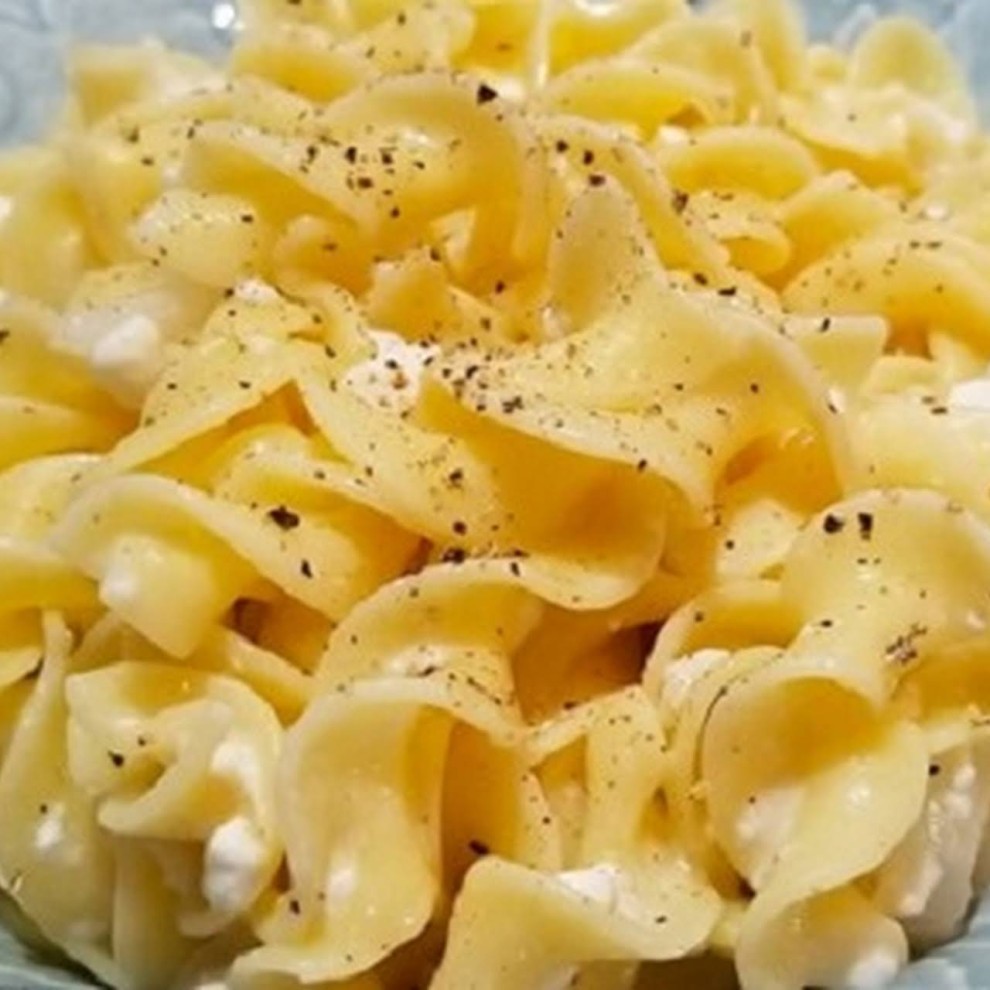 When the subject of cottage cheese comes up (admittedly, it doesn't all that often), I think of my Aunt Ruth Katz who always seemed to be enjoying (I think) a plate of the white curds for lunch. Because it can be lower in calories than other types of cheese, the stuff was a mandatory part of the "dieter's plate" for much of the mid- to late-1900s, only to be supplanted in popularity by yogurt by the end of the century.

So, what exactly is cottage cheese? Known by Little Miss Muffett as curds and whey, it's made by draining acid-laced milk curds from their whey and mixing with cream to produce its familiar creamy texture. Unlike other cheeses, it is neither pressed nor aged. In fact, if you let it "age" in the fridge too long, it will grow a truly unappetizing green and fuzzy mold.

Both Middle Eastern and Greek traditions have given us similar stories of the origin of cheese. According to 3rd century BCE Mesopotamian legend, a desert traveler discovered it accidentally when he stopped on his journey to quench his thirst with a drink of milk. But when he opened his saddlebags made of sheep's stomach (the original canteen), what he found was curdled cheese. In a remarkably similar story from Homer's Odyssey, the cyclops Polyphemus opened the lambskin bags he carried to find what we would identify today as feta cheese.

The beauty of cottage cheese is that it can be prepared quickly and enjoyed immediately. No need for sheep saddlebags or desert wanderings. No temperature-controlled refrigeration. No rind. No growing mold. In fact, for centuries farmers throughout the Old World made fresh cheeses (probably in their own cottages) with naturally soured cow's milk. So, when in the mid-19th century immigrants came to America, they brought with them their knowledge of fresh cheesemaking. Thus cottage cheese became part of our culinary vocabulary. Today, you can purchase cottage cheese in plain and flavored varieties.

Cottage cheese is a huge part of our Israeli cousins' diet, so much so that it was the subject of the Great Cottage Cheese Boycott. Like so many protests, this one began with a governmental decision made in 2008. Because one particular dairy cooperative, Tnuva, controlled more than 70% of the market, Israeli law considered it to be a monopoly. Therefore, the Antitrust Authority had the power to regulate prices to prevent price gouging. However, working on the theory that deregulation would foster competition and thereby reduce prices, the then-finance minister, Avraham Hirschson, decided that the government should stop regulating the price of cottage cheese.

Unfortunately, just the opposite happened. Prices increased almost 50%. Hence, the boycott. Organizers urged people to stop buying cottage cheese. Within a short time, 100,000 users had signed a petition on Facebook. As the boycott gained momentum, it sparked a public debate on the high cost of living in Israel and led ultimately to a drop in price.

Back to the present. My thoughts about cottage cheese became an obsession with Passover this year. Huh? What does cottage cheese have to do with our major spring Festival of Liberation? Well, in search of kosher-for-Passover cottage cheese, I schlepped to seven different supermarkets in Massachusetts. I found not a single container. Not one.

While I've long been fascinated by the process of cheese making, I know that the serious stuff is not a simpleton’s game. Research for a piece on cheesemaking once brought me to a professional fromager's office. His shelves were filled with tomes on chemistry, microbiology, and food science, certainly not in my wheelhouse. But, luckily for us amateurs, some cheeses are super simple to prepare in our own kitchens. In fact, several years ago, to the initial delight but ultimate boredom of my family, I went on a goat cheese and labneh spree.

That's when it finally dawned on me: the only difference between goat cheese and cottage cheese is which animal's milk I'd be using. So, I decided to make my own. Why hadn't I thought of this earlier and saved myself a lot of time and gasoline?

The 2022 Great Cottage Cheese Experiment was a success. Because I didn't add cream, the result had a consistency more like feta than the supermarket variety of cottage cheese in the plastic tub, but it was wonderfully flavorful. Even my daughter-in-law Shira, who doesn't like cottage cheese, loved it.

Best of all, there are no preservatives involved in the homemade version. Then again, I had no worries about spoilage as the fam gobbled up the batch in two days. Even the little ones ate it.

Pour 1 gallon of whole milk into a pot and bring to 190 degrees.

Take the pot off the burner and pour in 3/4 cup of either lemon juice or white vinegar. Stir.

Let the pot sit for 30 minutes.

Line a colander with two layers of cheesecloth or a clean towel and set into a large bowl.

Pour the contents of the pot into the colander.

Squeeze out the whey.*

Mix in a few tablespoons of cream if you like (I didn't).

Stir in some salt to taste, chives or even crushed pineapple if you like yours sweet.

That's it, except to enjoy.

*Don't throw your whey away! Add it to smoothies and shakes to provide more vitamins, minerals, and proteins. Use it as cooking liquid for potatoes, rice, grits, pasta, and grains. Substitute whey in any baking recipe that calls for water or even milk, such as for bread, pancakes, waffles, or muffins.

Illustration: Lokshen mit kaese (noodles and cottage cheese – that’s the translation and also the recipe, though adding a little butter or sour cream is good, as well). Arthur Schwartz, in Jewish Home Cooking: Yiddish Recipes Revisited, posits that it is a dish you cook “when you think there’s nothing in the house to eat.” This simple, yet supremely comforting, Ashkenazi take on mac ‘n’ cheese is seasoned with salt by Litvaks and with sugar in the Galitzianer preparation.